Shiv Sena, an alliance partner in the Bharatiya Janata Party (BJP)-led governments at the Centre and Maharashtra… 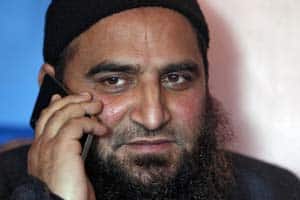 Shiv Sena, an alliance partner in the Bharatiya Janata Party (BJP)-led governments at the Centre and Maharashtra, on Monday demanded filing of a case against Jammu and Kashmir Chief Minister Mufti Mohammad Sayeed over the release of “terrorist” Masarat Alam.

It also sought an “explanation” from the PDP patron in this regard.

“Does Mufti Mohammad Sayeed has the right to free a terrorist? This is a person who is spreading terror and against whom there are a number of allegations and who has been arrested many times. Whatever is happening in the country is not good,” Shiv Sena chief Uddhav Thackeray told reporters in response to a query on the release of the Hurriyat hardliner.

“Sayeed should answer the people of this country why did he release a terrorist. Why should a case not be filed against Sayeed for releasing a terrorist. If a terrorist is released so easily it is an insult to our security forces,” he said.

He was speaking after a meeting of party legislators and ministers at ‘Shivalaya’ in South Mumbai.

Alam’s release has sparked a huge controversy besides bringing a huge embarrassment to BJP which is the alliance partner of PDP in J&K, with Prime Minister Narendra Modi today denouncing the move saying he shared the “outrage” over the unacceptable decision and would take whatever action is required.

While the Centre has sought a report from the J-K government over Alam’s release, the PDP has defended its action saying the step was taken to facilitate creation of a conducive atmosphere for talks with separatists.

To a query on his party’s support to the BJP on key legislative issues in ongoing budget session of the state Legislature, he said, “Our aim is to work only for the welfare of people. We will support the BJP on issues that are beneficial for the people.”