In a retort to Bharatiya Janata Party (BJP)’s ‘Jungle Raj 2’ remark about Bihar, JD (U), which heads state government… 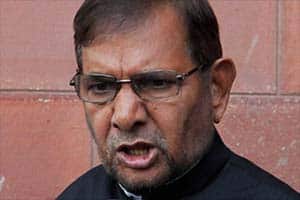 In a retort to Bharatiya Janata Party (BJP)’s “Jungle Raj 2” remark about Bihar, Janata Dal United (JDU), which heads state government, today alleged the description is apt for the situation across the country under National Democratic Alliance (NDA) rule since May last year.

JD (U) said such “rhetoric” by the National Democratic Alliance (NDA) major won’t serve any purpose for the nation and the same will be obvious during Bihar assembly polls scheduled later this year.

Taking potshots at JD (U) and Lalu Prasad Yadav-led Rashtriya Janata Dal (RJD)-alliance which took shape after JDU) and BJP parted ways ahead, BJP claimed it will clinch power in Bihar in the assembly polls.

“Rahul (Gandhi) ko dhundo (search Rahul) and Jungle Raj in Bihar, this is all jumlebazi. What they said worked during Lok Sabha election. But it will not work now,” Sharad Yadav, JD(U) chief, told PTI.

Yadav questioned whether whatever BJP had promised during general polls has been delivered yet.

“The untimely rains have caused substantial damage to crops in the country. Has the party mentioned anything about it?

“Be it the issue of love jihad, portrayal of (Nathuram) Godse as a great man, stand like those who don’t vote for BJP should go to Pakistanâ€¦it is BJP which has shown the real face of jungle raj to the country since it assumed power,” Yadav charged adding BJP will not do well in Bihar assembly polls.

Earlier in the day, Shah said people in Bihar are “very angry” and “upset” given there is “Jungle Raj-2” I Bihar and that they want a new government led by BJP in the state.