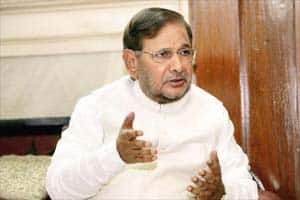 Amid reports that Bihar Chief Minister Jitan Ram Manjhi might recommend dissolution of the state Assembly before the Legislature Party elects a new leader to replace him tomorrow, JD(U) President Sharad Yadav today prepared a letter for Governor requesting him not to entertain plea of Manjhi who is in “minority” now.

Highly places sources said letter is ready and could be faxed to Governor Kesrinath Tripathi anytime.

Dogged by controversies ever since Manjhi took over from Nitish after the Lok Sabha debacle, the party decided to set its house in order for the Assembly elections later this year by bringing him back at the helm.

Knives were out between the two factions with Manjhi, who is a Mahadalit, terming tomorrow’s meeting, called by Yadav, as “unauthorised” and calling a Legislature Party meeting in his capacity as Leader of the House on February 20.

Yadav’s letter to the Governor assumes relevance as there are reports that Manjhi, who is being cornered within the party and who might be replaced by Nitish Kumar in the Legislature Party meeting tomorrow, might recommend dissolution of the Assembly.

Reports suggest that Manjhi has prepared a letter to recommend dismissal of 4-5 ministers to the Governor as he apprehends that these ministers, close to Nitish, were behind the oust-Manjhi campaign.

As per the reports, those who could be dissmissed by Manjhi include Rajiv Ranjan Lallan, P K Shahi, Ramai Ram, Shyam Rajak and Shrawan Kumar.

Meanwhile, Manjhi tonight expressed regrets for the clash outside JD(U) office and appealed to workers to express their feeling in a democratic manner.

In a statement issued by the Chief Minister’s Office tonight, Manjhi appealed to workers to avoid violence.

A clash broke between supporters of Manjhi and Nitish Kumar outside JD(U) headquarters in the day in apprehension of removal of Manjhi in Legislature Party meeting tomorrow.