The JD(U) faction led by Sharad Yadav today said he is following the resolution of the party’s national council by attending the RJD rally tomorrow, whereas Bihar Chief Minister Nitish Kumar has breached the decision by aligning with the BJP. 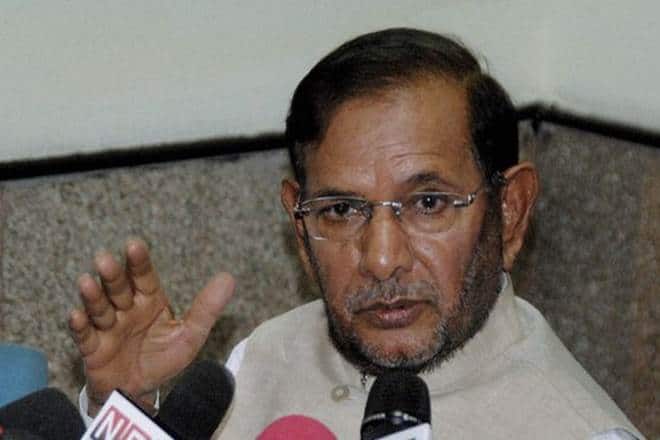 The JD(U) faction led by Sharad Yadav today said he is following the resolution of the party’s national council by attending the RJD rally tomorrow, whereas Bihar Chief Minister Nitish Kumar has breached the decision by aligning with the BJP. Javed Raza, the general secretary of the faction led by rebel Janata Dal (United) leader Sharad Yadav, in a statement, said Kumar did not follow the decision of party’s national council in April last year, in which he was authorised to make efforts to create an atmosphere of “BJP and RSS-free India”. The fact is that Kumar did not bring up the matter before the supreme bodies of the party before aligning with the BJP and therefore he violated the schedule 10 of the Constitution, Raza said. He was responding to JD(U) leader K C Tyagi’s letter asking Yadav to skip the RJD rally in Patna tomorrow and if he attends it would mean that he has quit the party voluntarily.

Leaders of different parties, including West Bengal Chief Minister and TMC supremo Mamata Banerjee, SP president Akhilesh Yadav and Congress’ Ghulam Nabi Azad will participate in the RJD’s ‘BJP bhagao desh bachao’ rally here, which its chief Lalu Prasad said would be an important event ahead of 2019 Lok Sabha election. Differences between Kumar and Yadav surfaced after the former snapped ties with the Congress and the RJD, and allied with the BJP to form a new government in Bihar last month. The Yadav faction has also staked claims over the JD(U)’s poll symbol (arrow) and the offices allotted to the party.

Citing the JD(U)’s national executive meeting in 2015, Raza said it was resolved that Sharad Yadav, then the party’s president, may be authorised to expand the model of Mahagathbandhan (grand alliance) at national level. So, Yadav is following the the principles and ethics as well as resolutions of the supreme body of the party, he said.

Sharad Yadav had earlier said he would be attending the RJD rally and leave for Patna tomorrow. The JD(U)’s Rajya Sabha members had on August 12 removed Sharad Yadav, who opposed the party’s decision to ally with the BJP in Bihar, as their leader in the House and replaced him with R C P Singh.