Coming together, different Kashmiri separatist groups today came out with a “campaign” schedule to oppose setting up of separate township for Kashmiri Pandit migrants and Sainik Colonies… 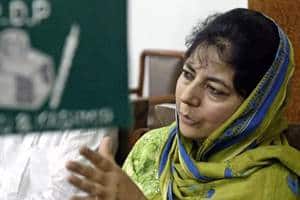 Mehboaba Mufti said banks need to focus on priority sector lending in the state, particularly targeting tourism, handicraft, handloom, agriculture and allied segments, which have a huge potential to generate avenues of employment for youth. (Reuters)

Coming together, different Kashmiri separatist groups today came out with a “campaign” schedule to oppose setting up of separate township for Kashmiri Pandit migrants and Sainik Colonies, notwithstanding the government’s assertion that there are no such moves.

The two factions of Hurriyat Conference — one headed by hardline leader Syed Ali Shah Geelani and the other by Mirwaiz Umar Farooq — said a seminar would be organised on June 12 and a sit-in protest will be held on June 15 to “create awareness about the anti-Kashmir plans” of the government.

In identical statements issued here, the separatist groups said the statements of the PDP-BJP coalition government over Sainik Colony, satellite townships for Kashmiri Pandits and the new industrial policy were “vague, ambiguous and confusing”.

They said if such steps were taken, there would be “alarming consequences” and the separatist groups would “not stay silent over these issues”.

The decision to organise protests comes despite Chief Minister Mehbooba Mufti asserting that there are no such moves.

The unity in the separatist camp has come after six years.

The last time separatist groups functioned from a single platform was in 2010 summer agitation that left nearly 120 people dead.

Next Story
Anurag Kashyap trying to take ‘mileage’ from row over Udta Punjab: Censor Board