Mufflerman is trending in Twitter for last 19 days; there is lot of buzz around that word… 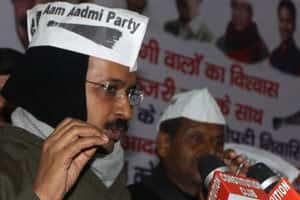 Out of participating donors in the campaign, 25 would be selected through a lucky draw, who will get an opportunity to join party Chief Arvind Kejriwal over a high tea when he is in the city on January 11, 2015, and take a selfie with him.

“…we are trying to see innovative ways of raising money for Aam Aadmi Party in a more open and transparent way. In continuation of the process, now we are coming with a new programme called Selfie with Mufflerman,” AAP functionary and the party’s unsuccessful candidate from Bangalore Central in the Parliamentary election V Balakrishnan said.

He said “you all know about Batman and Superman, now the biggest thing in this country is Mufflerman. Mufflerman is there to remove corruption and make sure there is transparency in politics in this country.”

“Mufflerman is trending in Twitter for last 19 days; there is lot of buzz around that word, so we said we will run a campaign where anybody who wants to donate Rs 500, can come to our website and donate the money. We are running this programme till January 7th,” he added.

‘#Mufflerman’ campaign on social media is inspired by Kejriwal who was often seen with a muffler during campaigning last year and as Delhi Chief Minister for 49 days.

Giving out the details of the Selfie with Mufflerman campaign, Balakrishnan said, “January 11 Arvind Kejriwal is coming to Bangalore, so whoever contributes Rs 500 and above can participate in this programme.”

Balakrishnan, former CFO of IT major Infosys, was also coordinator of a group called “Well wishers of AAP” that had organised Rs 20,000-per person fund-raising dinner with Kejriwal in the city before Lok Sabha polls.

Party functionaries said among different starts, Karnataka had raised the maximum funds during the Lok Sabha polls, and the state stood third in the funds collected for the last Delhi Assembly polls.

They also said that the party will come out with more such innovative programme to raise money in “an open and transparent” way.