Security beefed up at Pathankot air base

Following intelligence inputs, security has been beefed up and shoot at sight orders issued at the Air Force Station in Pathankot today. 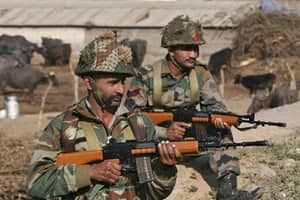 Following intelligence inputs, security has been beefed up and shoot at sight orders issued at the Air Force Station in Pathankot today.

A senior police official said security agencies had received “credible intelligence inputs” following which they had put up the posters declaring shoot at sight orders on the peripheral walls of the station.

These measures were being taken to dispel any fears locals might have, he said.

The SSP said vigil at the border, especially in 20 villages located near the zero line, has been increased.

“I requested the Army and BSF to help us sanitise the area. Fifteen vehicles were pressed into service, which covered 20 villages identified as ‘most sensitive’,” he said.

A group of armed militants had entered the air base in a pre-dawn operation on January 2 and shot dead seven security personnel before National Security Guard sharpshooters gunned them down.

On July 27 last year, three terrorists had made their way into the Dinanagar police station and were neutralised by the Special Weapons and Tactics police team after a day-long gun battle.

The sprawling Pathankot air base is spread over 16 square kilometres and houses nearly 5,000 people.