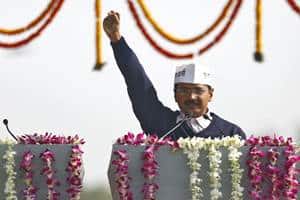 Arvind Kejriwal on Saturday congratulated the people of Delhi for the scheme's "success". (Reuters)

The second phase of Delhi’s odd-even traffic scheme aimed at battling pollution ended on Saturday evening with Chief Minister Arvind Kejriwal calling it a success even as there were concerns over the environmental impact of fires, including at two landfill sites.

Unlike the first phase held between January 1 and 15 this year, it was held with schools open and in simmering heat. It also coincided with the parliament session.

Some parts of the city reported congestion despite the scheme but there were stretches across the city where traffic moved swiftly.

Kejriwal on Saturday congratulated the people of Delhi for the scheme’s “success”.

“Today is the last day of Odd Even-II. Congratulations Delhi for again making it a success,” he said in a tweet.

While leaders of the ruling Aam Aadmi Party hailed the scheme, the Bharatiya Janata Party and Congress termed it a failure.

“It was a difficult exercise this time but residents of Delhi voluntarily followed it and made it a success despite many challenges,” he said.

Rai also said a decision on the third phase of the scheme will be taken after studying the impact of the previous two schemes. He announced the setting up of a six-member committee to make a comparative study and said it will give the report on May 9.

“Now, we have the experience of conducting odd-even traffic scheme during two seasons, winter and summer, with schools and colleges open during one phase. So the government will study both the models and only then a decision would be taken for the third phase of the odd-even scheme,” he said, adding that public opinion would also be sought.

Rai said there was “better compliance” over the first phase.

“There were fines on 8,988 people till Friday. The scheme was followed by 99.9 percent people,” he said.

Releasing figures for Saturday, the transport department said 402 people had been fined for violating the odd-even scheme during the day.

At an event earlier in the day, Rai said that according to an initial report of the Delhi Pollution Control Committee (DPCC), pollution levels came down at 55-60 places in inner Delhi but were comparatively high in the bordering areas. The DPCC will submit its final study report on the impact of the second phase of the scheme on May 6.

Delhi BJP chief Satish Upadhyay however said that the second round of odd-even scheme “will be remembered for autocratic fanaticism of Kejriwal government.”

“This round of odd-even scheme is a disaster,” he added.

“Pollution has not come down in this odd-even and the heavy traffic congestion was also witnessed in most parts of the city. So this leg of the scheme is a complete failure in terms of planning and execution,” she said.

Vivek Chattopadhyay, project manager air pollution control at the Centre for Science and Environment, said that direct emission of pollutants (particulate matter and NO2) from cars has come down approximately by 20-30 percent because of fewer cars on the roads.

“However, the impact of odd-even scheme on pollution levels was not very much felt because of fire incidents, specially at the landfill sites,” Chattopadhyay told IANS.

There were fire incidents at the Bhalswa and Ghazipur landfill sites.

Rai had also referred to fire incidents in the city so far during this summer. “The number of incidents of fire in Delhi between April 15 and 27 this year was more than twice compared to last year,” he said.

Providing figures of bus and metro ridership during the second phase, the state government said that while the average ridership of Delhi Transport Corporation buses was 38.86 lakh, buses under the cluster scheme carried 10.11 lakh. The figure was 26.29 lakh for Delhi metro, which made 3,248 trips daily during the 15-day period as against the nearly 3,000 normally, officials said.