A meeting of the SKM, an umbrella body of 40 farm unions, was held today in which the decision was taken. 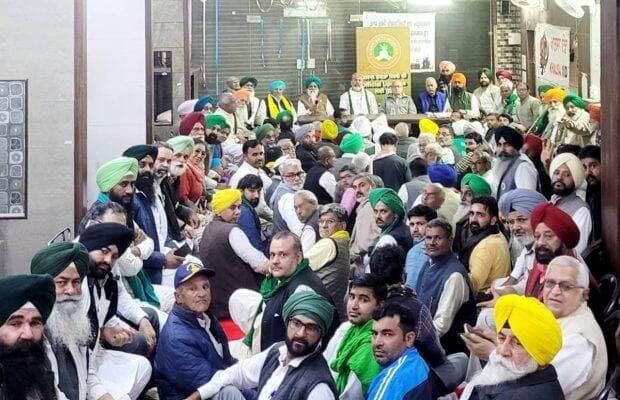 These five members will hold talks with the government with regard to their various demands.

The Samyukt Kisan Morch has formed a five-member team that will hold talks with the government and is likely to be a part of the proposed committee that will be constituted by the government to deliberate on different issues including Minimum Support price. The members of the committee are Gurnam Singh Chaduni, Balbir Singh Rajewal, Yudhvir Singh, Ashok Dhawale and Shiv Kumar Kakka.

It may be recalled that the government had reached out to the SKM informally on December 30 asking them to suggest five names for the committee. The Centre had repealed the three-agri laws on November 29.

A meeting of the SKM, an umbrella body of 40 farm unions, was held today in which the decision was taken. These five members will hold talks with the government with regard to their various demands. The next meeting of the SKM will take place on December 7.

“SKM has formed a 5-member committee to talk to the Government of India. It’ll be the authorised body to talk to the government. The committee will have Balbir Singh Rajewal, Shiv Kumar Kakka, Gurnam Singh Chaduni, Yudhvir Singh & Ashok Dhawale as its member. Next meeting of SKM will be held on 7th December,” said Rakesh Tikait, BKU leader.

The meeting took place near the Singhu Border between Haryana and Delhi. Singhu Border has been the epicentre of the farmers protests that had started late November last year. Farmer leaders from Haryana, Punjab, Uttar Pradesh and other places participated in the meeting that continued for around four hours. During the meeting, members also discussed pending demands which include legal guarantee on minimum support price (MSP), withdrawal of cases against farmers, compensation to kin of farmers who lost their lives during the agitation.

Earlier in the day, a group of 10-15 farmers sat on the pavement outside, wearing chains, in a symbolic protest, and demanded guarantee of MSP from the government, saying these farmers will not budge unless it is granted. The protesters included farmers from Rajasthan, Haryana and Punjab.

Repeal of the farm laws was one of the main demands of the protesting farmers. But the stalemate continues as their other demands such as legal guarantee on MSP, compensation to families of farmers who died during the movement and withdrawal of cases against them are still to be met.