Rumours of no salt stocks in Uttar Pradesh triggered a major law and order situation, leading to the death of a woman in Kanpur, police said on Saturday. 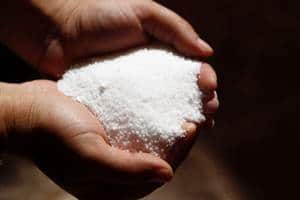 Rumours of no salt stocks in Uttar Pradesh triggered a major law and order situation, leading to the death of a woman in Kanpur, police said on Saturday.In the panic buying around midnight, when the rumours spread like wildfire in Bakarganj Bazaar in Kanpur, Savita (52) too, rushed to buy some salt.In the melee she was pushed around and slipped into a drain, dying on the spot, the police said.

The police had to resort to cane charge at many places as the panic-stricken gathered in long queues outside grocery shops and retail outlets.Similar situation was witnessed in Meerut where the mob tried to loot grocery shops at Shyamnagar, Lisadhi gate and Samar Garden.

Eleven persons were arrested in Ghaziabad for hoarding large stocks of salt and trying to sell them at inflated rates.Police and Food and Civil Supply officers were rush to many places in Lucknow, Allahabad, Etawah, Mainpuri, Agra, Meerut, Muzaffarnagar and Ghazipur to control the horde.

One person each was arrested in Firozabad, Mainpuri and Gorakhpur while trying to illegally stock salt packets.
Tension was reported from places like Rampur, Bareilly and Moradabad where salt sold at a whopping Rs 500 a kilo. The police intervened and forced the shops to close.

Chief Minister Akhilesh Yadav in a late Friday night statement asked people not to pay heed to rumours of salt shortage and assured that there was adequate stock.

Next Story
Centre rubbishes rumours of salt shortage, says no need to panic