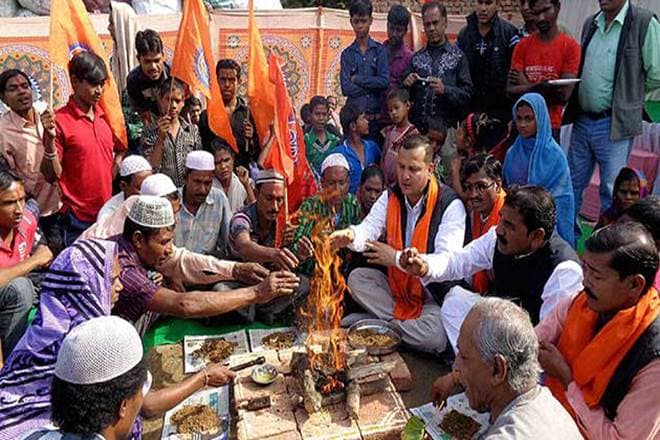 Muslim Rashtriya Manch (MRM), the RSS’s Muslim wing, organised an Iftar party in Ayodhya, where Muslims broke their fast with cow milk. “Muslims took a pledge at the Iftar that they will not eat beef as it causes disease. They also agreed that cow milk is good for health and has medicinal values,” MRM patron Indresh Kumar told PTI. Kumar was the chief guest at the Iftar party organised last evening. The MRM had invited prominent Muslim residents of the town, for the Iftar, the first meal after the day’s fasting. Kumar said that the gathering also acknowledged the benefits of keeping cows. He also claimed that cow slaughter is not permissible in any religion, including Islam. The MRM was set up in 2002 by the Rashtriya Swayamsevak Sangh (RSS) at the initiative of its then chief K S Sudarshan to allow the sangh parivar to reach out to the Muslim community on various issues including the vexed Ayodhya Ram Temple dispute.