Rs 2000 currency note by RBI: 15 must-know salient features and how you can identify it 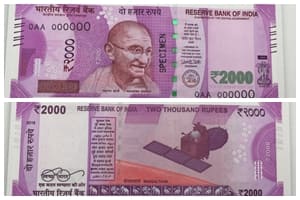 The government has set a cash limit of R$s 50,000 per week on the Russian embassy, that employs 200 people. Hence, the cash withdrawal limit leaves only Rs 250 cash in the hand of each of the employees for an entire week. ()

Following Modi government’s move to render all existing Rs 500 and Rs 1000 notes useless, RBI is all set to issue a new Rs 2000 denomination currency note. RBI will issue two sets of notes, one with the inset letter ‘R’ and one without the inset letter. Both will be legal tender money. The new Rs 2000 currency note will have the signature of RBI governor Urjit Patel. It will also have the year of printing ‘2016’ printed on the reverse of the banknote. The new note, with magenta base colour, will have a Motif of Mangalayan on the reverse. This is meant to depict India’s first venture into the interplanetary space. The dimension of the banknote will be 66 mm × 166 mm. How can you identify the correct Rs 2000 note? What are its salient features? We take a look:

Identification and salient features on the front of the Rs 2000 note, as highlighted by RBI:

Identification and salient features on the back of the Rs 2000 note, as highlighted by RBI:

1. Year of printing of the note on the left
2. Swachh Bharat logo with slogan

Also read: Rs 500 and Rs 1000 notes scrapped! Don’t panic, here is your full guide on what to do at banks and ATMs

3. Language panel towards the centre
4. Motif of Mangalayan
5. Denominational numeral 2000 in Devnagari

Identification and salient features on the front of the Rs 2000 note, for visually impaired, as highlighted by RBI: