According to the probe, Vemula’s suicide was not abetted by either the university administration or the government. It was his decision to end his life. Here is an explanation of some crucial conclusions of the inquiry commission. 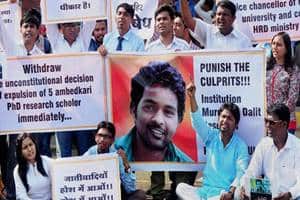 The inquiry asserts that since the university's decision to suspend Vemula and his batchmate from the hostel was challenged in the High Court of Andhra Pradesh and that the matter was pending on the day of his suicide, it cannot be cited as a reason for him ending his life. (PTI)

In a bid to probe the suicide of Rohith Vemula, the HRD Ministry in January set up a one-man judicial commission 11 days after his death. In its 41-page report that was submitted by the former Allahabad High Court judge A K Roopanwal in august, it is concluded that Vemula’s mother “branded” herself as Dalit to avail the benefits of reservation ; expelling him from the hostel was the “most reasonable” decision the university could have taken; personal frustration, not discrimination, drove the 26-year-old PhD scholar to suicide; Union Ministers Bandaru Dattatreya and Smriti Irani were only discharging their duties and there was no pressure on the Hyderabad Central University authorities.

According to the probe, Vemula’s suicide was not abetted by either the university administration or the government. It was his decision to end his life. Here is an explanation of some crucial conclusions of the inquiry commission:

Roopanwal questioned Rohith’s caste in detail. Since he was raised by his mother, V Radhika, the report formed by him tries to establish whether she belonged to the Mala (read SC) community or not. As per Roopanwal, she claimed to be Mala in order to support the caste certificate issued to her son. He also asserted that Radhika’s claim that her biological parents were SC, (as told to her by her foster parents) was “improbable and unbelievable.”

Roopanwala challenged, that if Radhika’s foster family did not disclose the names of her biological parents, how could they tell her their caste.

Scratching the surface further, the inquiry concluded that Vemula’s mother “branded” herself as Mala only because she managed to get the caste certificate from a person named Uppalapati Danamma, then a corporator, with whom she stayed for one and half years.

“To me it appears that this caste certificate has no value and that in order to take benefit of Scheduled Caste she (Radhika) anyhow obtained the Mala Caste certificate from the corporator, Uppalapati Danamma in whose house she remained for one and half years,” the report states.

In a bid to support his argument, Roopanwal also cited Radhika’s application for her younger son Raja Chaitnaya Kumar’s birth certificate in 2014 as evidence against her SC status. The report suggests that at that time she disclosed her caste as Vaddera, which is a backward class and if that were the case, the Scheduled Caste certificate issued to Rohith cannot be taken as genuine.

Earlier, in a conversation with The Indian Express, Rohith’s brother Raja while rejecting the conclusion said, “We lived like Dalits. We were raised in a Dalit community. Yes, my father is from a backward class, but whatever we know is from our experience of living like a Dalit. We have been discriminated against all our lives. Rohith referred to this in his letter too.”

The inquiry claims that Vemula did not face any discrimination while rejecting the notion that the university’s decision to expel him form the hostel was taken under political pressure. The commission supported this argument by saying that the interim reports of the nine-member proctorial board, which suggested that a strong warning should be issued to Susheel Kumar as well as Vemula and four other expelled students, was submitted on August 12, 2015.

Since Dattatreya’s letter to Irani was written on August 17, it could not have influenced the interim report. The commission then asserts that a report complied by nine persons cannot be obtained by pressure. HCU’s decision to expel Vemula and his batchmate form the hostel was “most reasonable” and lenient in comparison to the recommendations of the proctorial board, says the report.

Meanwhile, talking about the intervention of local BJP MLC Ramachandra Rao and Cabinet Ministers Smriti Irani and Bandaru Dattatreya in the case, the retired judge said that they were just “discharging their duties” as public servants.

The inquiry asserts that since the university’s decision to suspend Vemula and his batchmate from the hostel was challenged in the High Court of Andhra Pradesh and that the matter was pending on the day of his suicide, it cannot be cited as a reason for him ending his life.

“His suicide note is on the record which shows that Rohith Vemula had his own problems and not happy with the worldly affairs,” the probe report says. “He was feeling frustrated for reasons best known to him…He also wrote that he was all alone from childhood and was an unappreciated man…He did not blame anybody for his suicide. If he would have been angry with the decision of the university certainly either he would have written in the specific words or would have indicated in this regard. But he did not do the same. It shows that the circumstances prevailing in the university at that time were not the reasons for committing suicide. The whole reading of the letter shows that he was not feeling well in this world and under frustration ended his life.”

However, the commission failed to reason as to why the university’s equal opportunity cell headed by the anti-discrimination officer was not functional and that the grievance redressal committee headed by the ombudsman was not effective in this case.