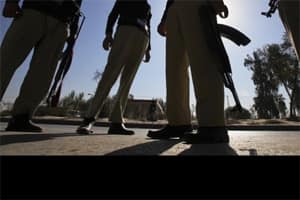 In a daring daylight heist, two unidentified armed assailants looted a cash van of around Rs 1.5 crore after killing a security guard at an ATM belonging to Citibank in Kamla Nagar area of North Delhi this morning.

According to the police, the incident took place near North Campus of Delhi University around 11 AM when custodians of the cash van, belonging to a private cash replenishment company, were in the process of refilling money into an ATM of a leading private bank at Bungalow Road.

“When the cash van reached near the ATM of Citibank, two unidentified bike-borne armed assailants arrived there and attacked its security guard. One of the accused shot at the guard for resisting their robbery attempt,” a senior police official said.

Police said the accused also threatened to kill custodians of the cash van and escaped with a bag containing Rs 1.5 crore kept in the vehicle.
The security guard was rushed to a nearby hosptial where he was declared dead.