Director of IB said return of the battle-hardened youth from Iraq and Syria poses a new challenge to the country. 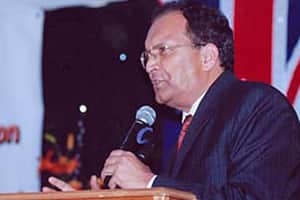 Referring to the terrorist violence in Iraq and Syria, Asif Ibrahim said the two countries have emerged as new theatres of 'Jihadi' violence. (PTI)

Terming Pakistan-based terror groups like Lashkar-e-Taiba and Jaish-e-Mohammad a constant security threat, Director of Intelligence Bureau Asif Ibrahim said return of the battle-hardened youth from Iraq and Syria poses a new challenge to the country.

“Pakistan-based Lashkar-e-Taiba and Jaish-e-Mohammad remain a constant threat to our national security,” he said addressing the 49th annual conference of DGPs, IGPs of all States, Union Territories and Central Police Organisations heads here organised by the Intelligence Bureau.

Referring to the terrorist violence in Iraq and Syria, Ibrahim said the two countries have emerged as new theatres of ‘Jihadi’ violence.

“The return of the battle-hardened youths from these regions into India poses a fresh challenge,” he said.

A youth from Mumbai’s suburb Kalyan, Arif Majeed, who was believed to have been killed while fighting for militant group ISIS in Syria, returned to the metropolis yesterday and was arrested after joint interrogation by NIA and Maharashtra ATS.

Commenting on the high voter turnout in the first phase of polling in Jammu and Kashmir, Ibrahim said it is an indication of the people rejecting the militant groups there,

“There has been a marked improvement in the situation in Jammu and Kashmir though there was marginal increase of incidents in 2014. The high voter turnout is an indication of the people rejecting the militant groups there,” he said, adding that people of the state have “reposed their faith in democracy.”

The security forces have to, however, maintain a high level of alertness and vigil as the threat from militant groups remains in the hinterland, the IB chief said.

“Indian Mujahideen has created terror modules. This has been compounded by the recent developments in Syria and Iraq”, he said.
Ibrahim said due to sustained pressure of the security forces, the CPI (Maoists), which is the most violent Naxal group, is besieged with serious problems.

“It is time to formulate a fresh strategy to degrade the core capabilities of the group,” he said.

The Director of IB said security situation in the North-East remained fragile due to certain insurgent groups remaining out of the ambit of mainstream politics.

On the issue of recruitment to terror modules through social networking websites, he said, “Their recruitment is made through Internet and social media sites. Security agencies will have to remain alert on such cyber activities”.