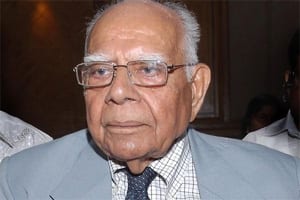 Advocating former Pakistan ruler Pervez Musharraf’s four-point formula on Kashmir, former BJP MP and eminent lawyer Ram Jethmalani today said the document should be the basis for a permanent solution to the Kashmir issue and that Musharraf’s efforts were “frustrated” by India.

“Musharraf came to India with a firm and honest intention. His proposal is a fantastic solution to the Kashmir problem. It is a wonderful document which should be the basis for a permanent solution of Kashmir. I have no difficulty in confessing that his efforts were frustrated by India and not Pakistan,” 92-year-old Jethmalani told reporters here.

Jethmalani, who is the chairman of Kashmir committee, also claimed he had made some changes to Musharraf’s proposal and the purpose of the document was that there should be a secular democracy on both sides of Kashmir.

“I have been working for Kashmir for a long time and Musharraf knew. He sent his proposal to me through a common friend. I made some changes to the document as part of the proposals on behalf of the Kashmir Committee which Musharraf accepted. The whole purpose of the document is that there should be a secular democracy on both sides,” he said.

The former union minister, who was expelled from the BJP earlier this year, said a formal body comprising of statesmen and recognised by both India and Pakistan should be there to see to it that people are not exploited by these governments.

The head of the Kashmir Committee, constituted in 2002 to reach out to separatists here, said he was in constant touch with the separatists and not all of them were “Pakistan agents”.

“They all are not Pakistan agents. It is possible that at one time they were pro-Pakistan, but I am glad to tell you that majority of them want to be with India,” he said.

Talking about the killing of two youth by Army in Chattergam, Jethmalani said the Army men involved in the incident on Monday should be dealt with according to law.

“If they did that intentionally, there should be severe punishment…they should be hanged. But it should first be thoroughly investigated as to what led to the firing,” he said.

He said Army’s presence in the state has to be “terminated as soon as the terror stops”.

“Army’s presence should be terminated as soon as possible. But let the terror stop, I am sure army must go,” he said.

Asked about curbs on separatist leaders ahead of the assembly elections, the noted legal luminary said, “I have told them (separatists) to create good evidence that they have been restrained and I will take the matter to the Supreme Court.”