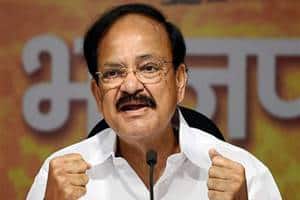 Naidu asked the workers to "work hard" for strengthening the party in the national capital. (PTI)

In the house of 200, the ruling BJP has 160 members and Congress 24. National Peoples Party has four, BSP has three, National Unionist Zamindara Party has two and seven are independents.

The polling ended at 4 PM. All 199 out of 200 MLAs cast their votes. BSP MLA B L Kushwah was not allowed by the high court to cast his vote as he is in judicial custody.

Earlier, BJP had claimed the support of two legislators of National Unionist Zamindara Party and three independent MLAs who attended its training programme yesterday at a hotel.

Congress’s state unit had announced its support to former union minister Morarka on the directions of AICC and issued a whip to the party MLAs to vote for him. It is expecting support of independent MLAs and other non-BJP parties.

Due to presence of Morarka, polling became necessary.