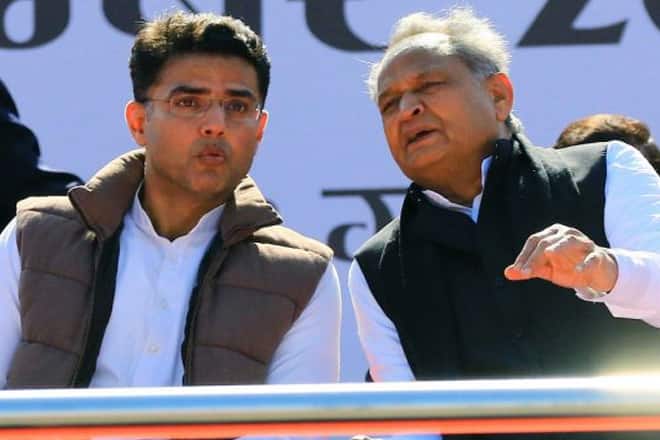 Rajasthan Chief Minister will seek a trust in the Legislative Assembly on Friday. Gehlot and Ashok Gehlot met on Thursday for the first time after truce.

Rajasthan Floor Test: The Congress government headed by Ashok Gehlot in Rajasthan won a confidence vote in the Legislative Assembly on Friday, ending the threat triggered by a rebellion within the Congress ranks in the state. The motion of confidence moved by the Congress government was passed by voice vote, an expected win after the return of the 19 dissident MLAs led by Sachin Pilot to the party-fold. Replying to the debate on the motion, Chief Minister Ashok Gehlot criticised the BJP, accusing it again of trying to bring down his government. “I will not let the government topple at any cost even if you make all attempts,” he said. During the debate, the opposition BJP accused the Gehlot camp of blaming it for the infighting within the Congress. Sachin Pilot, who was sacked as deputy chief minister after he rebelled against Gehlot, intervened in the debate, saying he would fight for the party. The House later adjourned to meet again next Friday.

No tradition of illegally tapping phones in Rajasthna: CM Gehlot

Responding to BJP’s allegation of illegal phone tapping, Rajasthan Chief Minister Ashok Gehlot said, “There hasn’t been a tradition in Rajasthan to illegally tap phones of MP and MLAs and neither has any such thing taken place.”

Referring to Akbar, Rajasthan Parliamentary Affair Minister Shanti Dhariwal said the Mughal emperor had to taste defeat in Mewar of Rajasthan during his quest to expand his empire. “Similarly, BJP’s attempts to topple the Ashok Gehlot-led Congress government were defeated,” he added.

Congress trying to blame BJP for their own in-house quarrel: Gulab Chand Kataria

Will keep govt protected by being its shields, spears: Sachin Pilot

Sachin Pilot in his address said ‘whatever was to be said, or heard, whether about me or any of my companions, we have spoken about our ailment to the doctor before whom it was supposed to be raised’. “After getting the treatment, the 125 of us are standing inside the House.” He added: “After finishing all the talks, we have entered the House. It doesn’t matter how much firing takes place along this border. Everyone else and I shall keep it protected by being its shields and spears,” he said.

“You say we have been staying in a five-star culture? We were sitting there so that Gehlot could fight the battle to save the country’s democracy against those arrogant people sitting in Delhi,” independent MLA Sanyam Lodha said in the Assembly.

Speaking on his changed sitting arrangement in the Assembly, former deputy CM Sachin Pilot said: “I wondered why my seat was designated here. I thought for two minutes and saw that this is the border between the government and the opposition. Who is sent to the border? The strongest warrior.”

Sachin Pilot thanked Congress leaders Rahul Gandhi and Priyanka Gandhi Vadra for listening to his and the other MLAs’ ‘suggestions on how to be a more responsive government and how to be more flexible in order to seek re-election three years later’. “It is a good thing the party heard us and established a road map on how to implement those things,” he said.

Ashok Gehlot says it will be victory of truth in assembly

The Congress today issued a whip to all its MLAs, asking them to be present in the House for the Assembly session. The whip was issued by Mahesh Joshi.

Ahead of the CLP meeting on Thursday, the Congress withdrew the suspension of rebel MLAs Bhanwarlal Sharma and Vishvendra Singh — their names had come up in audio tapes which were shared by the party with the Special Operations Group. CLICK HERE TO READ MORE

BSP issues whip to MLAs to vote against Gehlot government

Due to heavy rainfall and water logging, several MLAs from the Ashok Gehlot camp are yet to reach the Assembly. Keeping this in mind, the Assembly was adjourned to 1 pm today.

At the CLP meeting, Gehlot asked MLAs to consider whatever happened in the last one month as a bad dream and forget. “Hamare hamare hi hote hain, paraye paraye hi hote hain (our dear ones are our own, outsiders are outsiders),” he said. “Consider it a bad dream which is over, the entire family is together now,” the CM said.

Ashok Gehlot and Sachin Pilot came face to face for the first time on Thursday after the month-long political crisis which began after the latter, along with 18 other MLAs of the party, openly rebelled against the chief minister. Pilot and Gehlot shook hands in a moment marking the return of the sacked deputy CM. CLICK HERE TO READ MORE

The Congress’ announcement of trust vote came hours after the opposition BJP said it will move a no-confidence motion during the session. The Legislative Assembly Session comes days after the Congress high command announced the return of Sachin Pilot and 18 other dissident MLAs to the party-fold.

The Rajasthan High Court will resume hearing on Friday on petitions filed by BJP MLA Madan Dilawar and the BSP challenging the merger of six MLAs with the Congress. The petitioners have challenged the merger of the six MLAs- Sandeep Yadav, Wajib Ali, Deepchand Kheria, Lakhan Meena, Jogendra Awana and Rajendra Gudha-with the Congress and demanded a stay on the execution of the order passed by the speaker in this regard.

‘Misunderstanding should be forgiven, forgotten for moving forward’: Gehlot

Rajasthan Chief Minister Ashok Gehlot said on Thursday that whatever was the misunderstanding in the Congress party, it should be “forgiven and forgotten” for moving forward. CLICK HERE TO READ MORE

#SaveDemocracy should be our priority with the spirit of forgive and forget. The conspiracy that is going on to topple elected governments one by one in the country, the way governments were toppled in the states of Karnataka, Madhya Pradesh, Arunachal Pradesh & other states,
2/

The Ashok Gehlot-led Congress government will move a confidence motion in the Rajasthan Assembly during the session beginning Friday. “The CLP meeting was held in a very cordial manner in which discussions were held on moving the confidence motion in the assembly. All the MLAs pledged that they will work with unity under the leadership of Chief Minister Ashok Gehlot,” AICC general secretary Avinash Pande said.

According to a PTI report, another MLA informed that in the meeting Sachin Pilot expressed gratitude to everyone for supporting him during his tenure as Pradesh Congress Committee (PCC) chief for six years. Pilot also thanked Congress interim president Sonia Gandhi and leaders Rahul Gandhi for giving him the opportunity to work as the party’s state chief for so long.

Referring to Sachin Pilot’s open rebellion while addressing the MLAs on Thursday, CM Ashok Gehlot asked them to ‘forget what has happened’. “The CM said that proving a majority without 19 MLAs would not have made us happy,” another leader said while quoting Gehlot. Besides, Gehlot assured everyone that grievances of all will be addressed whenever they want.

Ashok Gehlot on Thursday said that his government will go for a trust vote in the House “and show the power of Congress”. Party sources confirmed that he will seek a trust vote Friday itself. The decision of a trust vote was taken at the Congress Legislature Party meeting chaired by CM Ashok Gehlot at his residence in Jaipur. The meeting was attended by his former deputy Sachin Pilot among others.

The revolt by Sachin Pilot and 18 dissident MLAs led to a political crisis in Rajasthan where Congress formed the government in December 2018. After the party high command intervened in the matter on Monday, the MLAs along with Pilot returned to Jaipur. The Rajasthan Legislative Assembly session comes days after the Congress’ top leadership announced the return of Sachin Pilot and 18 other dissident MLAs to the party-fold. In the 200-member Legislative Assembly, the Congress has 107 MLAs and the Bharatiya Janata Party has 72 members.