Rajasthan crisis LIVE: After more than 90 Congress MLAs refused to meet top Congress leaders, Congress observer for the state Ajay Maken, expressing his disappointment, called it an act of “indiscipline.” 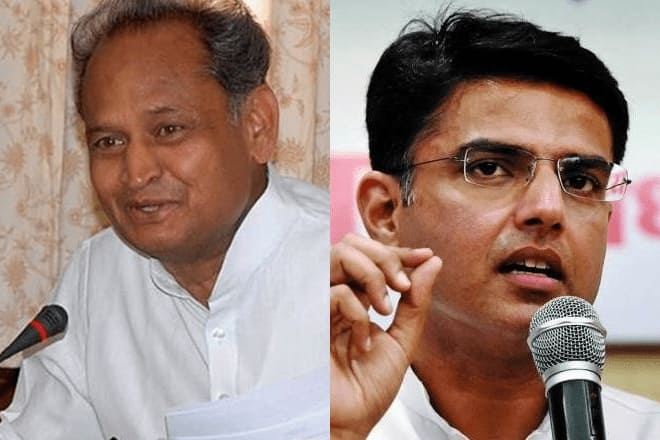 Rajasthan Congress Crisis Live Updates: Days after Rajasthan Chief Minister Ashok Gehlot decided to run for the Congress president, the question over who will replace him as the CM has stirred up a row between the Gehlot camp and the Pilot camp. 90 legislators close to Gehlot has threatened to resign if Pilot is made the CM of the state. Top Congress leaders including Rajya Sabha MP Mallikarjun Kharge and General Secretary in-charge of Rajasthan Ajay Maken has reached Jaipur in a bid to pacify both camps.

Meanwhile, the one-on-one meeting between the Congress leadership and the dissenters from the Gehlot camp didn’t go ahead as few legislators were reportedly unavailable. According to reports, former Rajasthan Deputy Chief Minister Pilot is the leadership’s top choice as the CM, should Gehlot win the Congress presidential race due to the one person, one post system within the party. Gehlot had earlier revealed his intentions of continuing as the CM. The Congress has 107 MLAs and the support of 13 independents in the 200-member strong assembly. After more than 90 Congress MLAs refused to meet top Congress leaders, Congress observer for the state Ajay Maken, expressing his disappointment, called it an act of “indiscipline.” The two observers have apprised Sonia Gandhi about the Rajasthan political crisis. The Congress interim president has asked both Maken and Kharge to submit a written report. According to reports, the party might issue show-cause notices to MLAs from the Gehlot camp, including state minister Shanti Dhariwal.

Congress party observer for Rajasthan Ajay Maken said that the demand of someone from the 102 dissenting MLAs be made the next CM will be decided by Sonia Gandhi after consulting others.

After meeting Sonia Gandhi, Maken said that the party's interim president has asked for a written report.

According to India Today, the recent turn of events in Rajasthan has left many Congress leaders unhappy. Reportedly, the Congress top brass is not satisfied with Gehlot after Rajasthan Congress MLAs close to him defied the party observers' command in Jaipur on Sunday night.

According to media reports, Gehlot has apologised to Congress observer Mallikarjun Kharge and assured him that he had no hand in instigating the Rajasthan Congress MLAs against the party's central leaders.

How can Kamal Nath who had failed to solve internal dissent in Madhya Pradesh be sent to mediate in Rajasthan?, asked BJP's Shehzad Poonawala.

BJP leader Satish Poonia on Monday took a dig at the Congress over the crisis in its Rajasthan unit, saying none of its leaders want to be the party's national president and prefer to be a state chief minister or a regional leader.

The Congress in Rajasthan plunged into a crisis as several MLAs loyal to Ashok Gehlot, who was seen as the frontrunner for the post of party's national president, submitted resignation letters over a possible move to appoint Sachin Pilot as the next CM.

“This drama of 'Kisa Kursi Ka' ( the tale of CM's chair) started in Rajasthan in 2018 when slogans for Gehlot and Sachin Pilot were raised. It then continued for portfolio allocation and then for rooms in the secretariat in Jaipur,” Poonia said adding that throughout the entire episode, the people of the state suffered. (PTI)

After we submit our report to party's interim president Sonia Gandhi, it is upto her to take a decision regarding this matter, Kharge told reporters after reaching Delhi.

Maken and Kharge arrive Delhi to meet top Congress leaders and apprise them of the internal conflict in Rajasthan.

After Gehlot loyalists held a parallel meeting when Congress observers Ajay Maken and Mallikarjun Kharge had wanted to meet the dissenting MLAs one by one, the Congress Rajya Sabha MP told Gehlot to ask his MLAs to respect the party and keep it united.

14:10 (IST) 26 Sep 2022
Rajasthan political crisis LIVE UPDATES: What are the three demands made by Gehlot loyalists?

According to the first demand, the miffed MLAs wanted the issue of Rajasthan CM to be decided once a new Congress president is elected, i.e. after October 19.

The second demand was to nominate a legislator from within the Gehlot camp to be the next CM face from Rajasthan. Another condition put forth by the dissenting MLAs was they be allowed to meet Maken and Kharge in groups, and not individually.

After more than 90 Congress MLAs refused to meet top Congress leaders, Congress observer for the state Ajay Maken, expressing his disappointment, called it an act of “indiscipline.”

Congress observer Ajay Maken, ahead of returning to Delhi, told reporters that the party legislators led by Pratap Khachariyawas, S Dhariwal and Mahesh Joshi had kept three demands. The primary demand was to allow the Congress president to appoint the CM after the election results were declared. The demand was rejected as it would lead to conflict of interest, Maken further added.

“Ashok Gehlot has left behind such a government which even the Gods will not be able to save,” says BJP state president Satish Poonia on Rajasthan political crisis.

11:25 (IST) 26 Sep 2022
Rajasthan political crisis LIVE UPDATES: BJP has nothing to do with this drama, says Deputy LoP

“This govt (Rajasthan) arose with an internal dispute, which is still ongoing. For the 1st time, MLAs have defied their high command… CM should call an emergency cabinet meeting to dissolve the Assembly. BJP has nothing to do with this,” Dy LoP of State Assembly, Rajendra Rathore tells ANI.

Both AICC observers Mallikarjun Kharge and Ajay Maken will come to Delhi today and submit the report to the top leadership. Miffed MLAs are not ready to meet the observers. Next Step will be decided after the discussion with the high Command: Sources tell ANI.

“We aren't going to Delhi at the moment, we have been instructed by Congress interim president Sonia Gandhi to conduct one-to-one talks with Rajasthan Congress MLAs. We'll meet them tonight,” Congress leader Ajay Maken tells ANI.

Why only 10-15 MLAs are being consulted?: Khachariyawas asks reporters.

On Sunday night, Congress leaders Mallikarjun Kharge, Ajay Maken, and Sachin Pilot arrived at the residence of CM Ashok Gehlot ahead of the CLP meeting. (ANI)