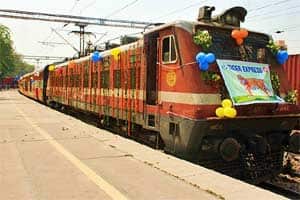 "The Tiger Express is one of the most innovative tourist products launched by IRCTC. Its announcement was made by Railway Minister Suresh Prabhu in his budget speech," said Dr A K Manocha, CMD, IRCTC.

Flagging off the train using a remote control from Mumbai, Prabhu said it has been launched to spread awareness about conservation of tigers.

This is the first semi-luxury train on a tourist circuit having a dining car. The itinerary has a tariff structure starting from Rs 38,500, IRCTC said in a statement.

Giving details of the itinerary, an IRCTC official said during the five-night-six-day trip the train would take passengers to Katni from where they will be taken Bandhavgarh by road for a safari.

From there they will be taken to Kanha for another safari.

The tourists will then be taken to famous Dhuadhar Falls in Bhedaghar, Jabalpur, before heading back to Delhi.

“The Tiger Express is one of the most innovative tourist products launched by IRCTC. Its announcement was made by Railway Minister Suresh Prabhu in his budget speech,” said Dr A K Manocha, CMD, IRCTC.

The train has been launched on the World Environment Day with an aim to spread awareness among people on tiger conservation, the Railways said in a statement.

“I congratulate railways for starting this train. Railways is attempting to make peopleu00a0realize theu00a0importance of tigers. And I am happy about the factu00a0that the launch of this train was announced in the budget and I am happy that the train has been started right on time,” Harshvardhan said.

IRCTC said the fare, starting from Rs 38,500, can go up to Rs 49,500 for single occupancy. An additional surcharge of Rs 4,000 per person will be charged from foreigners for safari booking at Bandhagarh and Kanha.