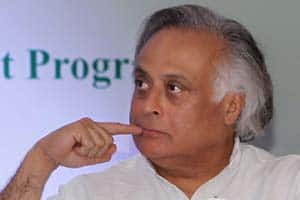 Senior Congress leader Jairam Ramesh today said the party vice president Rahul Gandhi, who is currently on a sabbatical, will take part in the agitational programme on Land Acquisition Bill on April 19.

“The issue concerning the land acquisition is not temporary and I believe when Rahul Gandhi returns he will take part in the April 19 Kisan andolan,” Ramesh said here.

Ramesh said he was sure that later an agitation will be launched all over the country in favour of farmers under the leadership of Rahul Gandhi.

Rahul is on a sabbatical for more than a month and is expected to be back within two weeks.

“The view of the party is that till the 2013 legislation is not implemented, the Opposition to the present format will continue both in and outside the Parliament,” he said.

“SP, BSP, CPI(M), CPI and other parties are with the Congress on this issue,” he added.

Earlier, Congress leader Digvijay Singh yesterday had said that Rahul Gandhi will address Kisan Rally of the party on April 19.