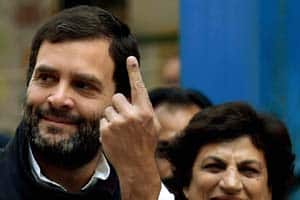 Congress Vice President Rahul Gandhi was among the high-profile people who turned up early to vote for the Delhi Assembly elections in which his party is facing a herculean task as the contest is seen confined largely between AAP and BJP.

Clad in a white kurta, blue jeans and a half-jacket, the 44-year-old leader cast his ballot at booth number 88 in Aurangzeb Lane in New Delhi constituency.

There was no queue when he arrived at the booth at around 10:10 AM. After casting his vote, Gandhi flashed his inked finger for the shutterbugs.

Gandhi did not respond to any question by the waiting media.

The Congress Vice President addressed four election rallies in the city where his party suffered a severe drubbing in 2013 Assembly polls, managing only 8 out of 70 seats.

This time, the election is largely seen as a direct contest between BJP and AAP.

Rahul’s cousin Varun Gandhi, a BJP leader, cast his vote at a polling booth in Nirman Bhavan in central Delhi.

Asked whether the Delhi elections are a referendum on Prime Minister Narendra Modi’s popularity, Varun refused to comment.