Rahul Gandhi at Times Square: Congress Vice President Rahul Gandhi on September 20 addressed Non-Resident Indians (NRIs) in New York as a part of his two-week long visit to the United States (US). 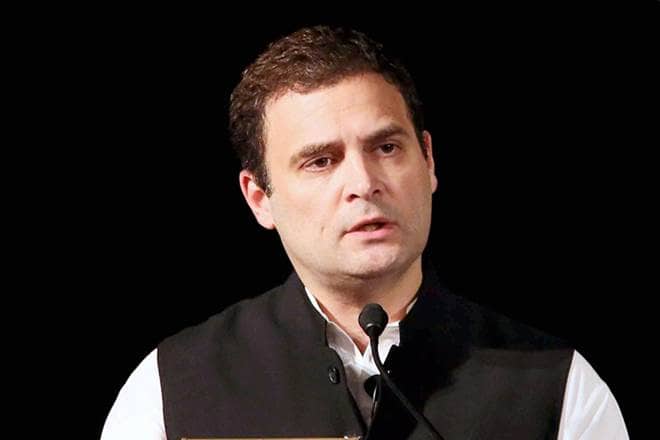 Rahul Gandhi at Times Square: Congress Vice President Rahul Gandhi on September 20 addressed Non-Resident Indians (NRIs) in New York as a part of his two-week long visit to the United States (US). Earlier in the trip, Gandhi had addressed students of the prestigious University of California, Berkeley. He also interacted with intellectuals, political leaders and government officials in Washington DC and a gathering at the Princeton University. RaGa addressed the NRIs in New York with the purpose of making them a part of India’s development. Here is the full transcript of Congress VP Rahul Gandhi’s Speech to Indian National Overseas Congress in New York-

RG: Thank you. Thank you Sam and thank you Shubh ji. I’d like to welcome all the people on the stage and every single one of you in this room. You know, many years ago Sam came to India and he told you the story of Indira Gandhiji listening to his presentation. Sam, I think it was 1982? Yes, 1982. I was 12 years old. In the morning my father told me that there is a presentation and you have to come. I didn’t know what presentation meant, I thought I was going to get a present. Anyway, I went there, and my sister and I were made to sit down at the back of the room quietly. And we sat there for 6 hours. And Sam and my father discussed computers. I didn’t quite understand what a computer was, nobody actually in 1982 really understood what a computer was.To me it looked like a little box with a TV screen on it. And frankly I didn’t like that presentation, as a little kid, I couldn’t stand the fact that I had to sit for 6 hours. And four or 5 years later, I started to see the result of that presentation. There were typewriters in the Prime Ministers Office. And everybody wanted to use a typewriter. And Sam and my father said to everyone in the PMO’s office that everyone has to move to computers. And everybody said, NO, we like our typewriters, we don’t want computers. So in Sam and in my fathers typical style they said fine you can keep your typewriters, what we are going to do is, we are going to replace typewriters with computers for one month, and after one month we will have your typewriters back. They gave them the computers for one month and then after one month they said ok we are bringing your typewriters back and everyone started to fight, NO, we dont want our typewriters back we want the computer.

Ideas take time to travel into India. But, when an idea is good, India understands it very quickly, and uses it and shows the world how it can be used.
I have been talking to Sam and I made a point in the car to him and he said “I hadn’t thought about it”. You are all Non Resident Indians.
The original congress movement was an NRI movement. Mahatma Gandhi was an NRI, Jawaharlal Nehru came back from England, Ambedkar, Azad, Patel, these were all NRIs. Every single one of them went to the outside world, saw the outside world, returned back to India and used some the ideas they got and transformed India. I’ll go even further, the biggest success in India, our friends in BJP said nothing happened, but one of the biggest successes in India, the milk that most of India drinks, it was man called Mr. Kurien, he was an NRI. He came from the United States and he transformed India. Sam is another example. There are thousands of examples that we have not recognised. So before I even get into the depth of my speech, I want to tell you that I went from San Fransisco to Los Angeles to Washington to New York, I addressed people in Berkeley ,in Princeton, and wherever I went, you made me feel poud to be an India.

Also Read| Rahul Gandhi in US: In address to overseas Indians, Congress VP talks about tolerance to role of IITs; key takeaways

We have many religions in our country. We have many different languages in our country. Every single one of them lives happily together, and the reason they have been able to do so are the ideas of the Congress party. Sam Pitroda just said that the Congress is a hundred and thirty years old. Yes, it is true, the Congress organisation is more than a century old. But, the Congress idea in India is thousands of years old. We don’t represent an organisation, we represent a philosophy that is thousands and thousands of years old. I’ll tell you a little but about what this philosophy is. What did Gandhi actually fight for, what was our freedom movement about, what did Mr. Kurien do? What did Sam pitroda do? What do thousands of NRIs do? They stand up for the truth. It doesn’t matter what is standing against them, when they believe in something and they are convinced that is the truth they stand up for it and pay the price for it. That is the Congress idea.

There are a couple of challenges that India is facing.

The single biggest challenge and I’ll give it to you in numbers. 30,000 youngsters come into the job market every single day. Today, only 450 of them are getting a job. I’m not even talking about the unemployed.

This is the biggest challenge in front of our country. And, this challenge is going to be addressed by building a unified approach by bringing people together.

We discuss everything in India.There’s a divisive politics in India but the real challenge facing India is that 30,000 youngsters looking for a job and only 450 getting a job. You can imagine as this process continues what the result will be. India simply cannot give its youngsters a vision if it is unable to give them a job. The Congress party has a vision to solve this problem. And I will tell you little bit about this vision. Currently, the entire focus is on 50 or 60 really large companies. We believe that if you are to create millions and millions of jobs in India, it has to be done by empowering small and medium businesses and entrepreneurs.

Second, I’ll give you another number, 40% of India’s vegetables rot. Agriculture can simply not be ignored. There are people from Punjab here, you will understand exactly what I am saying.

Healthcare is going to transform. And I said this in my speech in Berkeley, today all the information in healthcare is in the doctors memories tomorrow all that information is going to be in computers. India has the world’s second largest population. We do very large number of surgeries, heart surgeries, eye surgeries, we have a great understanding of how to do these things. There is a huge opportunity for India in healthcare and we can become the healthcare centre of the world but we have to plan for it today. And I am not talking about simply health tourism, I’m talking about about constructing whereby in the future large parts of medical processes are acrid out in our country.
I can give you a similar vision for the IITs. I went to Berkeley, I was in Princeton yesterday. US universities are networks, knowledge networks. Information travels within them, they are connected to businesses, they are connected to economy. Our IITs are tremendous institutions but they are not networks. If we connect our IITs to our industries and businesses across the world, they will start to compete with the best businesses in the world. these are things that can be done. I, want to go back to the beginning of my speech- You need to get involved. You have tremendous knowledge, You have tremendous understanding, you work in different fields. I invite you to come and work with the congress party and discuss the vision going forward. We want to take your help. Sam Pitroda single handedly transformed the telecom industry. We don’t want one Sam Pitroda. We want atleast 10-15 Sam Pitrodas to transform India, Because there’s a lot of work to be done in India.

The last thing I’d like to say to you, India has always shown the world how to live in harmony. For thousands of years India has had a reputation of peace and harmony. This is being challenged. There are forces in our country that are dividing the country and it is very dangerous for the country and it ruins our reputation abroad.
Many, many people in the Democratic party and the Republican party asked me what is going on in your country? We always believed that your country worked together, we always believed your country was peaceful. What is going on in your country?

And that is something we have to fight. India’s reputation in the world is very important. The world is transforming and people are looking towards us. China is rising, we have a relationship with the Unites States . Many countries in a violent world are looking to India and saying maybe, India has the answer to the 21st century. Maybe India has the answer for peaceful coexistence in the 21st century. So, we cannot afford to lose our most powerful asset. Our most important asset is that 1.3 billion people lived happily, non-violently, peacefully and the world respected us for that . This is something that as Congress people every single one of us has to defend. India is a country that belongs to all its people. Doesn’t matter who they are I can see my Sikh brothers, people from different states. India does not belong to any ONE of you. India belongs to this entire room and India belongs to every single one of us and that is what the Congress party is. Again, I’d like to thank you very much and I’ve told Sam, whenever you want me to come to the Unites States, whenever you want me to come anywhere, just call me, MEIN HAAZIR HO JAUNGA. And final thing, I told Sam today, he said about the photographs and I have learnt something, Sam hamarein yahan individual photographs chalti hain, so next time we will give a decent amount of time so that we can have selfies or photographs together. Thank you very much, All the best!