Rafale deal signed: How the fighter jets will add greatly to IAF’s firepower against Pakistan and China

Rafale fighters are 4.5 generation jets and with the deal for 36 aircraft being signed today, the Indian Air Force’s (IAF) combat power will be enhanced significantly. 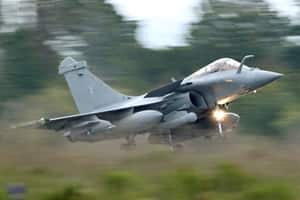 Rafale fighters are 4.5 generation jets and with the deal for 36 aircraft being signed today, the Indian Air Force’s (IAF) combat power will be enhanced significantly. The Rafale fighter jet is equipped to carry out both air-to-ground strikes, as well as air-to-air attacks and interceptions during the same sortie. Rafale is an “omni-role” aircraft, with a full-range of advanced weapons such as Meteor Beyond-Visual-Range (BVR) missile, SCALP long-range missile, helmet mount system, AESA (Active Electronically Scanned Array) radar and latest warfare systems.

Dassault Aviation says that the aircraft has the ability to track targets and generate real time three-dimensional maps. It has a wing span of 10.90m; length of 15.30m; and a height of 5.30m. The digital ‘Fly-by-Wire’ Flight Control System is aimed at providing longitudinal stability. But, more than anything else, it is the missiles that are integrated on the Rafale that add to the IAF’s firepower. The Meteor BVR air-to-air missile has a range in excess of 150 km. This means that the IAF can now hit targets inside Pakistan without crossing the territorial boundary. On the other hand, the Scalp is an air-to-ground cruise and has a range of over 300 km. Both missiles give India the requisite ability to conduct strikes in Pakistan and China.

Also Read
Singaporean minister to deliver first Arun Jaitley memorial lecture
Opposition by ‘pseudo-environmentalists’ to Metro car shed in Aarey could be ‘sponsored’: Devendra Fadnavis
By not welcoming PM Modi, KCR has insulted not individual but institution: BJP
Revenge served cold: How a two-year-old speech by Devendra Fadnavis has come back to haunt Uddhav Thackeray

This is also validated by experts who feel that the Rafale fighter jets would serve to be effective deterrents against not only Pakistan, but also China. Says Colonel (retd) K V Kuber, an Independent Consultant on Defence and Aerospace, “The Rafale deal has come through a little late, but it is good news that it has. We only hope that this goes beyond the 36 fighter jets that are coming right now.” “To my mind the Rafale is comparable to the F-35 in some ways, it’s better than the F-18 too. It’s a jet that has huge and varying payload carrying capacity,” Kuber told FE Online. “Additionally, it can carry a nuclear warhead. In that sense it is one of the deadly aircraft in the world. Also, the strike range of the Rafale is great. It is better than the Su-30 MKI. It means that with the Rafale you will get the capability to attack areas in the range of China’s Chengdu as well,” he added.

Ankur Gupta, Vice President- Aerospace & Defence at Ernst Young India says, “The Rafale is a modern day fighter that was conceived-developed-built to replace all other fighters of the French Airforce. It has been in contention in India since 2006 where in fact it was a last minute replacement to the Mirage 2000-5 in the competition. With its addition, the IAF’s depleted arsenal will get a significant performance boost.” “The IAF has long admired the Mirage and the Rafale is its true successor. The Rafale with enhanced use of advanced carbon fibre composites helps reduce the RCS and enhance stealth features, this is something that is also found on our indigenous LCA,” Gupta told FE Online.

According to Ankur Gupta, “the weapons package with its BVR capabilities will give the IAF a feature that was still in the developmental stage with the Air Launched Brahmos.” “With the export orders from Egypt and Qatar the Rafale’s only weakness, it’s ‘unproven’ nature, has also been taken care off,” he adds.

Air Vice Marshal Manmohan Bahadur VM (Retd) and a Distinguished Fellow, CAPS is all praises for the Rafale’s modern avionics, “The Rafale deal is a few years late, but nevertheless will add to the IAF’s defence capabilities. It is a modern aircraft with modern avionics,” Bahadur told FE Online. “Apart from that, the weapons package it comes with makes a truly potent jet for the IAF. The AESA radar and the BVR missiles make the Rafale a formidable aircraft,” he said. “I would also like to add the Rafale fighter jet has been chosen after very intense rounds of scrutiny and comparisons with other in the class. In that sense it is a model way of choosing a fighter jet,” he observed.

Rajeswari Pillai Rajagopalan, Senior Fellow and Head, Nuclear & Space Policy Initiative at ORF points to three advantages that India gets from the Rafale deal. “The Rafale fighter jet will add to the IAF’s fighting squadron, and speaking in just numerical terms that it is good thing. It would help us in terms a Pakistan and China centric warfare scenario. This is a 4.5 generation fighter jet and it is a good platform, that has also been tried by the mid-eastern countries,” she tells FE Online.

“Also, strategically, India is doing well to deepen ties with France, which has proven to be a reliable partner. All in all, the Rafale deal works in terms of capacity and capability for IAF, and the strategic ties that India has with France. The only pitfall that I can see is that India has jets from Russia as well, and in that sense the variety of platforms from different countries creates maintenance issues,” she concludes.