Days before the letter was sent, the French side had rejected an Indian request for a sovereign guarantee or a bank guarantee for the deal, and instead offered to provide a “comfort letter” from their prime minister. 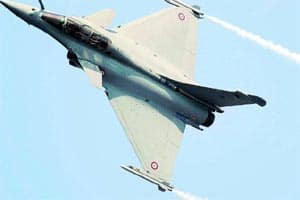 India had announced its decision to buy the 36 Rafale fighters from France during Prime Minister Narendra Modi’s visit to Paris last April. (PTI)

India is yet to respond, either verbally or in writing, to a letter sent to Defence Minister Manohar Parrikar on April 1 by his French counterpart Jean-Yves Le Drian, who made what is said to be the “best offer” his country can make in a government-to-government deal for 36 Rafale fighter jets, sources told The Indian Express.

The initial French offer for the 36 fighters made by Dassault Aviation was for around Euro 10.5 billion, following which the Indian side asked for a 30 per cent cut. The latest offer, made in the French minister’s letter, is of around Euro 7.8 billion, said sources.

Days before the letter was sent, the French side had rejected an Indian request for a sovereign guarantee or a bank guarantee for the deal, and instead offered to provide a “comfort letter” from their prime minister.

As reported by The Indian Express on March 14, the law ministry had raised objections over France’s refusal to provide any bank guarantees. Asked about Le Drian’s letter, the defence ministry said it does not comment on ongoing negotiations between two governments. Sources said there was “a significant difference” between the two offers. The original offer included a ten-year product support period, which has been brought down to five years, they said. The latest figure also does not include the cost of setting up infrastructure at two airbases for two Rafale squadrons, said sources.

India will have to make a payment of 15 per cent of the total cost at the time of signing the deal, said sources. The first aircraft is scheduled to be supplied within 36 months of the signing of the deal while the last aircraft will reach India in seven years.

”Even though the Indian configuration is different from what the French air force flies, calculations show that the French government has agreed to provide a discount of around 7-8 per cent over its buying price. It will have to compensate Dassault for it in some way,” said sources.

The IAF has demanded a fighter configuration different from the one flown by the French air force, including an Israeli helmet-mounted camera and a third-party weapons system.

Price negotiations for the jets have been complicated by deals signed by France for selling the fighter to Egypt and Qatar. Sources said it would not be possible for France to go too far below those prices. Unlike India, Egypt and Qatar have opted for the same configuration as Dassault supplies to the French air force.

Sources also said that there was a small window available for the two sides to close the deal. French Ambassador François Richier, who has been closely involved with the deal, is ending his Delhi stint in June. It would take a few months for his replacement to present his credentials and understand the intricacies of the deal, they said.The French establishment is also expected to go into election mode later this year with presidential polls scheduled next year.

India had announced its decision to buy the 36 fighters from France during Prime Minister Narendra Modi’s visit to Paris last April. This followed the selection of the French fighter in a decade-long competitive bid for India’s next Medium Multi Role Combat Aircraft (MMRCA). The 126-aircraft MMRCA tender was withdrawn by the NDA government soon after the announcement of the 36 fighter deal in Paris.

Technical negotiations were completed earlier this year and the deal was expected to be signed in January when French President Francois Hollande was the chief guest at the Republic Day celebrations. But both sides were unable to conclude negotiations over price by then.