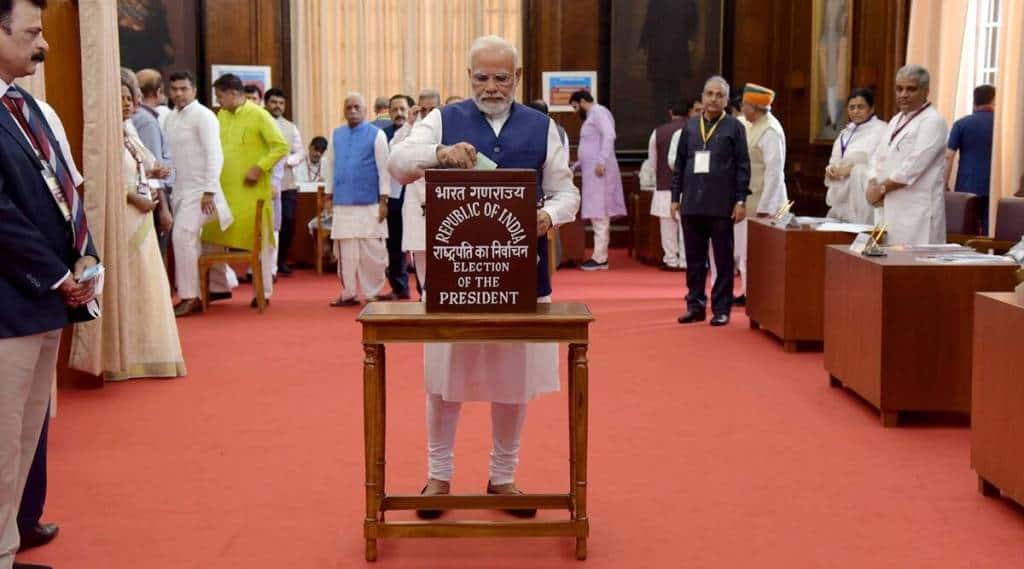 Prime Minister Narendra Modi casts his vote at the Parliament to elect the 15th President of India. (Twitter/Narendra Modi)

Presidential Election of India 2022 Polling Today Live Updates: India’s lawmakers on Monday voted to elect the country’s 15th President. Opposition candidate Yashwant Sinha is pitted against NDA candidate Droupadi Murmu. Nearly 4,800 MPs and MLAs casted their votes across the country. The counting of the votes will take place on July 21. The monsoon session of the Parliament, which also began today, will witness the elections of a new president and a new vice-president, who will also be the ex-officio chairman of the Parliament’s Upper House, Rajya Sabha. Earlier today, Opposition candidate Yashwant Sinha appealed to all MPs, MLAs to listen to their inner conscience while voting, while alleging that the BJP is using all its might and money power against him for the Presidential polls. “This election is crucial as it will be decided in the coming days if India’s democracy will be saved or not. Since, there are no whips for this election and the voting will be done in secrecy, I request all the lawmakers to listen to their inner conscience,” said Sinha.

Both Sinha and Murmu have travelled extensively across the country campaigning and meeting lawmakers in the days leading up to the polls. Sinha has been more vocal throughout the campaigning phase. On Sunday, in his final appeal to all the political parties, Sinha said that the fight is between two ideologies, and not two persons. While claiming that he will protect India’s democratic principles, Sinha stated that his opponent Droupadi Murmu is “supported by those who are mounting daily attacks on democracy.” Sinha further asked if India deserved a “rubber stamp president,” or someone who would defend the Constitution, instead of defending the Prime Minister.

Also Read
Stamp of traitor will remain forever: Uddhav Thackeray tells Eknath Shinde at Dussehra rally
Who is Amritpal Singh, Bhindranwale supporter who now heads organisation founded by Deep Sidhu?
Will not work for Nitish Kumar even if he vacates CM’s chair for me, says Prashant Kishor
Live Updates

After voting for the presidential elections ended at 5 pm, Chief Returning Officer PC Mody said that the total turnout at Parliament was at 99.18 percent, while adding that the elections were held peacefully and cordially everywhere. The ballot boxes from all states will be flown in to the Parliament by today, as per Mody.

Union Finance Minister Nirmala Sitharaman and Union Power Minister RK Singh cast their votes in PPE kits at the Parliament House in Delhi as they are recovering from COVID.

The Delhi High Court has dismissed a petition seeking to stop convicted MPs and MLAs from voting in the presidential elections. (Bar and Bench)

Shiromani Akali Dal MLA Manpreet Singh Ayali on Monday boycotted the presidential poll, saying issues related to Punjab remain unresolved and he was not consulted by his party leadership before deciding to back NDA candidate Droupadi Murmu.

The Dakha MLA said he spoke to voters and workers in his constituency, and took the decision considering “sentiments of 'Panth' (Sikh community).

In a video message, Ayali said he is boycotting the poll on his won and the party leadership did not consult him before deciding to extend support to Murmu.

However, the Dakha MLA said he has no opposition to the candidature of Murmu. “But when the party decided to vote for the BJP candidate, I was not consulted. Even the Sikh community was also not consulted,” he said. He alleged that there had always been discrimination against Punjab. (PTI)

Congress MPs Sonia Gandhi, Shashi Tharoor, and Mallikarjun Kharge cast their votes for the election of the President.

“I am a Congress MLA but I have voted for NDA’s Presidential candidate Droupadi Murmu. It’s my personal decision as I’ve listened to my heart which guided me to do something for the soil and that’s why voted for her”: Odisha Congress MLA Mohammed Moquim

Going against his party's collective decision to back Yashwant Sinha, NCP MLA votes for Droupadi Murmu.

“We believe that Presidential polls are different from any political election. It's the highest post and vote should be cast for a suitable candidate,” said Aaditya Thackeray.

“The tribal community of India never had an opportunity to hold this position before,” said Tarkishore Prasad. (ANI)

Polling began for the presidential elections on the Rajasthan Assembly premises here at 10 am on Monday, with state Chief Minister Ashok Gehlot among early voters.

The state government's chief whip in the Assembly, Mahesh Joshi, also reached there to cast his vote.

NDA candidate Droupadi Murmu is pitted against joint Opposition pick Yashwant Sinha in the much-awaited poll to elect the next President of India.

Both Murmu and Sinha had recently visited Jaipur to seek support for the elections.

There are a total of 200 MLAs in the Rajasthan Legislative Assembly besides 25 Lok Sabha and 10 Rajya Sabha members from the state. (PTI)

Maharashtra BJP president Chandrakant Patil on Monday said he was sure that some of the Congress MLAs who remained absent during the Eknath Shinde government's trust vote will vote as per their conscience in favour of National Democratic Alliance's presidential poll candidate Droupadi Murmu.

Speaking to reporters in the Maharashtra Vidhan Bhavan premises where voting was underway for the presidential election, Patil said the Congress cannot even guard its own MLAs.

“I am sure that some Congress MLAs who remained absent during the vote of confidence will apply their conscience this time as well,” he quipped.

The NDA has fielded Droupadi Murmu for the country's top constitutional post, while the opposition has nominated former Union minister Yashwant Sinha. (PTI)

“Our sister from the tribal community will now become the President. MLAs in MP are voting for her. I would like to appeal to everyone to rise above the boundaries of parties, vote on the basis of our conscience, & contribute to make Droupadi Murmu the President,” says Chouhan. (ANI)

Voting to elect the next President of India is underway in Manipur Assembly Secretariat, Imphal.

“This election is crucial as it will be decided in the coming days if India's democracy will be saved or not. Since, there are no whips for this election and the voting will be done in secrecy, I request all the lawmakers to listen to their inner conscience,” Opposition candidate Yashwant Sinha appeals to MPs, MLAs, while adding that the BJP is using all its might and money power for the Presidential polls.

Voting to elect India's 15th President underway at the Parliament.

Gujarat Chief Minister Bhupendra Patel casts his vote in Gandhinagar in the election being held for the post of President of India. (ANI)

While the MPs will be given a green ballot paper, the MLAs will get a pink ballot paper to cast their votes. After the polling, all the ballot boxes from the states will be flown into Delhi and will be stored in a chamber within the parliament.

With the backing from non-NDA parties like BJD, YSRCP, BSP, AIADMK, TDP, JD(S), Shiromani Akali Dal, Shiv Sena and now JMM, Murmu is comfortably placed with over 6.67 lakh votes out of a total of 10,86,431 votes, with the majority mark set at 50% of total votes cast plus 1. If elected, she will become the first tribal woman to become the President of India.

Bengal MLAs, dressed in tribal attire, show victory sign as they queue up in the State Assembly, Kolkata to cast their votes for the Presidential election.

Voting begins for the Presidential election; MPs and MLAs across the country cast their votes.

In the process laid down by Article 55 of the Indian Constitution, the President or the head of the state is not elected directly by voters. Instead, the President is elected indirectly by an electoral college, comprising elected representatives from Lok Sabha, Rajya Sabha and the state legislative assemblies, including the Union Territories of Delhi and Puducherry. The nominated members in the Rajya Sabha and state assemblies along with the Members of Legislative Council of states that have bicameral legislatures, are not a part of the electoral college. The value for each MP vote has gone down from 708 to 700 after the state of Jammu and Kashmir was bifurcated into two Union Territories in 2019. The value of an MP's vote was fixed at 708 since the 1997 Presidential elections.

Unlike direct elections, EVMs will not be used in the presidential polls as a 'single transferable voting system' is used. In this system, the elector can mark more than one preference by placing the number 1,2,3, 4, 5 and so forth, against the names of the candidates of an elector's choice in order of preference in the ballot paper. A pen with a violet ink will be used to mark the ballot papers.

Article 55(2) specifies a secret ballot system for the Presidential elections. The article also states the formula as to how the value of an MP or an MLA is calculated in the election process. The population of states that is followed for the calculation of the value of an MLA is based on the 1971 census. Naturally, an MLA from states with a higher population and a higher number of assembly seats will have a greater value for their votes, as compared to an MLA from lesser-populated states like Sikkim or Arunachal Pradesh. The value for each MP and MLA are derived from the following formulae:

As lawmakers from Maharashtra gear up to vote on Monday to elect the country's next president, there are concerns among the opposition parties over the possibility of cross-voting.

MLAs and MPs form the electoral college to elect the President of India.

The Nationalist Congress Party (NCP) and Congress – the two main opposition parties in Maharashtra – have already held meetings with their legislators to ensure there is no any cross-voting in favour of the BJP-led National Democratic Alliance's candidate Droupadi Murmu.

The opposition is concerned as Maharashtra Chief Minister Eknath Shinde on Sunday claimed that Murmu would get the support of 200 MLAs from the state.

“We will manage to get the votes of 200 MLAs for Droupadi Murmu. We want a very comfortable win for her,” he said. (PTI)

As lawmakers from Maharashtra gear up to vote on Monday to elect the country's next president, there are concerns among the opposition parties over the possibility of cross-voting.

MLAs and MPs form the electoral college to elect the President of India.

The Nationalist Congress Party (NCP) and Congress – the two main opposition parties in Maharashtra – have already held meetings with their legislators to ensure there is no any cross-voting in favour of the BJP-led National Democratic Alliance's candidate Droupadi Murmu.

The opposition is concerned as Maharashtra Chief Minister Eknath Shinde on Sunday claimed that Murmu would get the support of 200 MLAs from the state.

“We will manage to get the votes of 200 MLAs for Droupadi Murmu. We want a very comfortable win for her,” he said. (PTI)

The process of voting will commence in an hour around 10:00 am. Nearly 5,000 MPs and MLAs will cast their votes to choose the next President of India.