Kovind also said the faith reposed by the people in the country’s democratic institutions strengthened the foundation of Indian democracy. 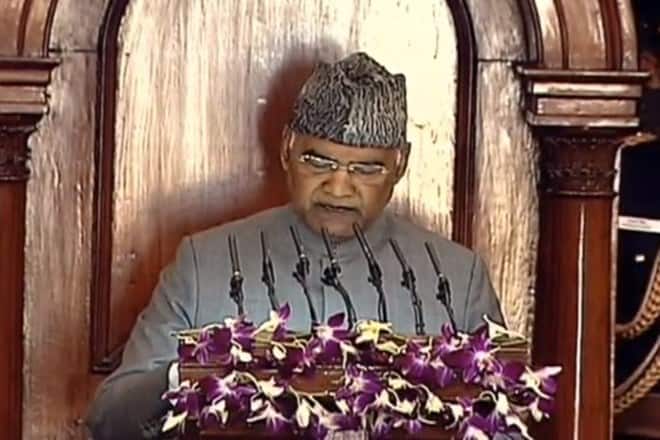 The President said India has always believed in the principle of equal respect for all faiths but at the time of partition in 1947, "this very belief of India and of its people came under the most severe attack". (ANI photo)

President Ram Nath Kovind on Friday complimented the people of the country for displaying “maturity” after the Supreme Court verdict on Ram Janmabhoomi-Babri Masjid issue. Kovind also said the faith reposed by the people in the country’s democratic institutions strengthened the foundation of Indian democracy.

“The maturity displayed by the countrymen after the Supreme Court’s verdict on Ram Janmabhoomi is also laudable,” he said in his address to the joint sitting of both houses of Parliament.

In its verdict on November 9, the apex court had paved the way for the construction of a Ram temple at the disputed site at Ayodhya, and directed the Centre to allot an alternative 5-acre plot to the Uttar Pradesh Sunni Waqf Board for building a new mosque at a “prominent” place in the holy town in Uttar Pradesh.

There were no reports of any major violence anywhere in the country after the apex court verdict.
The Supreme Court had also said a trust should be formed within three months for the construction of the temple at the site where many Hindus believe Lord Ram was born.

As per the judgment, the central government has been directed to formulate a scheme with necessary provisions for setting up of the trust with a board of trustees or any other appropriate body, the functioning of the trust, the powers of the trustees, transfer of land to the trust and all necessary, incidental and supplemental matters.