President Ram Nath Kovind today said India was facing a possible “mental health epidemic” and stressed the need for providing access to treatment facilities to those suffering from mental disorders by 2022. 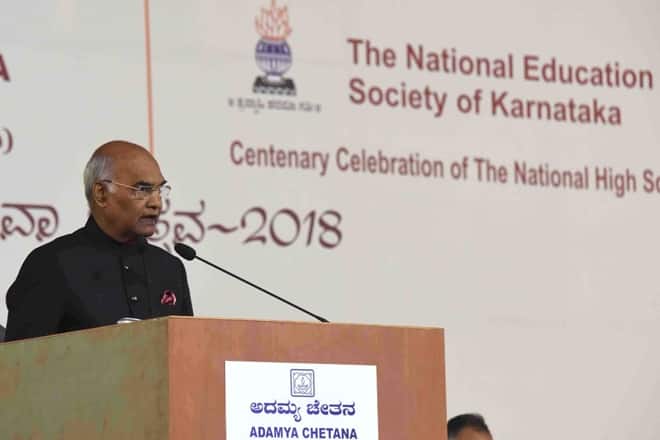 President Ram Nath Kovind today said India was facing a possible “mental health epidemic” and stressed the need for providing access to treatment facilities to those suffering from mental disorders by 2022. Speaking at the 22nd convocation of the National Institute of Mental Health and Neurosciences here (NIMHANS), he called for addressing the shortage of mental health professionals. “For those who are getting their degrees at the convocation, the real challenge has just begun. They are going into a world where their skills are acutely needed more than ever before,” the president said. “India does not simply have a mental health challenge… it is facing a possible mental health epidemic,” he said. Pointing out several reasons for this, he said the country was experiencing technological, economic and demographic changes that were transforming the nature of diseases.

Kovind said in 2022, India would be celebrating its 75th  anniversary of Independence and it should be ensured that by  then at least those suffering from serious mental disorders have been diagnosed and have access to treatment facilities. “Let us take this up as a national mission,” he said.

The government, non-government sectors and all related public and private institutions need to contribute to this effort, he said, and asked the NIMHANS, as the country’s premier health institute, to draw a road map and to be the navigator towards achieving this goal. Observing that the shortage of mental health professionals was another major gap that the country has to address, Kovind said there were just about 5,000 psychiatrists and less than 2,000 clinical psychologists in the country.

These numbers were very small, he said. “Especially for the purpose of diagnosis of mental illnesses, it will be advisable to use (the services of) physicians, psychologists who teach in colleges and educational institutions as well as auxiliary nurses and midwives who are at the front line of public health system across the country,” he said. On the NIMAHNS’s mental health survey, the president said the findings were alarming as 10 per cent of Indians have one or more mental health problem.

In a nation of 1.3 billion people, that was a staggering figure. The number of Indians suffering from mental health problem was larger than the entire population of Japan, he said. He said the one of the biggest problems faced by those with mental and neurological issues was the stigma which lead to the matter being ignored or not discussed. In some cases it led to self diagnosis that could worsen the situation, he said, adding, “our society has to fight this culture of stigma”. “We need to talk about mental health issues and treat  ailments such as depression and stress as diseases that can be cured,” he said.

Other than conventional treatment, the role of counselling services and practices such as yoga and vipassana in helping those with mental health problems should also be explored with greater vigour, the president said. Karnataka Governor Vahubhai Vala, Union ministers Ananth Kumar and JP Nadda were present at the event during which sub- speciality block for Neurosciences, Medical Cyclotron facility and Intra-operative MRI with three operation theaters were inaugurated.