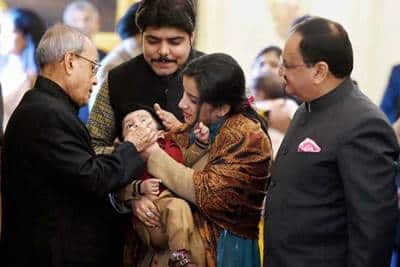 President Pranab Mukherjee today launched the pulse polio programme for 2017 by administering polio drops to children aged below five years at the Rashtrapati Bhavan here.The programme will cover 17 crore children aged under five years in an effort to maintain the country’s ‘polio-free’ status.

Mukherjee launched the countrywide programme on the eve of the National Immunization Day. Health minister J P Nadda and Ministers of State for Health Anupriya Patel and Faggan Singh Kulaste were present during the event.

Cautioning that the risk of importation of polio still persists from three countries — Pakistan, Afghanistan and Nigeria, Nadda said that the government has strengthened the immunization programme through introduction of several new vaccines.”As the risk of importation still persists from remaining three countries (Pakistan, Afghanistan and Nigeria) where poliovirus is still circulating, the need still persists for the country to maintain the population immunity and sensitive surveillance till global polio eradication happens.

“This is maintained through National and Sub National Polio rounds along with sustained high quality polio surveillance,” Nadda said.
He said that the polio-free certification of the entire South-East Asia Region of World Health Organisation including India on March 27, 2014 is a “huge” accomplishment in the history of public health.

Noting that immunization is one of the key interventions in reducing child deaths in country, he said that to expand the its scope in country, Rotavirus virus vaccine has been introduced as part of the Univeral Immunization programme (UIP) last year.
“The Ministry will soon introduce Pneumococcal Conjugate Vaccine that will help to reduce the burden of diarrhea, pneumonia and meningitis and (launch) a countrywide campaign with Measles-Rubella vaccine in phased manner,” Nadda said.

Nadda said the government is conducting continuous polio vaccination at the international borders with India and a travel advisory has also been issued to vaccinate all travelers who are travelling between India and eight other countries.

“Also, an Emergency Preparedness and Response Plan (EPRP) is in place under which Rapid Response Teams (RRT) have been formed in all states and UTs to respond urgently to any importations of poliovirus,” Nadda said.To provide double protection to children, the government has also introduced the injectable Inactivated Polio Vaccine (IPV) into its routine immunization program, he said.

To provide double protection to children, the government has also introduced the injectable Inactivated Polio Vaccine (IPV) into its routine immunization program, he said.Nadda pointed out that India has reduced the under-5 mortality rate from 75 per 1000 live births in 2005 to 45 per 1000 in 2014.

Nadda said another initiative of the government, Mission Indradhanush launched in 2014, has strengthened the immunization coverage and ensured that all vaccines reach targeted beneficiaries even in remotest areas.

The Union Health Minister lauded the efforts of volunteers, frontline workers, health officials across the states and development partners for their tireless efforts in keeping the country polio-free.