A sizeable chunk of keynote speakers supposed to address the concerns of Indians overseas include those linked to the Sangh Parivar. 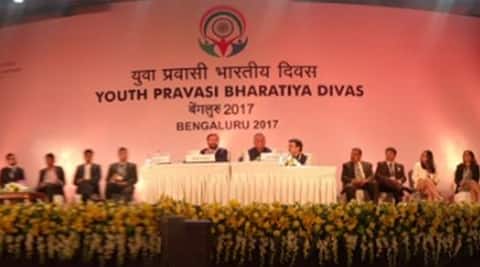 A sizeable chunk of keynote speakers supposed to address the concerns of Indians overseas include those linked to the Sangh Parivar.

Pravasi Bharatiya Divas 2017, the biennial event convened to celebrate Indian diaspora across the world, is witnessing a clear dominance of Sangh Parivar outfits this time. A sizeable chunk of keynote speakers supposed to address the concerns of Indians overseas include those linked to the Sangh Parivar. Indian Express on Sunday reported that as many as 28 out of 110 speakers at nine plenary sessions of the events are from Sangh affiliated oganisations.

The list includes many who were a part of organising committee’s of Prime Minister Narendra Modi’s events abroad. Sanjeev Krishan Bhakri, one of the keynote speakers at Pravasi Bharatiya Divas website, has been described as a founding member of the Indian-Australian Community foundation that organised Modi’s public reception in Australia in 2014. Bhakri also serves as general secretary Hindu Council of Australia.

Regular participants of the event could point-out a clear right-wing dominance. A US-based associated PBD said that many speakers have been handpicked from Sangh affiliates. He even added that efforts are being made to award people involved with organising events during the foreign visits of the PM Modi.

Others among the panel with Sangh links include Thailand businessman and Ekal Vidyalaya Movement’s Susheel Kumar Saraff, Hindu Swayam Sewak Sangh Inc’s Arun Kankani, Balesh Singh Dhankar involved with a “platform to connect Indian diaspora and wider community in Australia with Swachh Bharat Abhiyan’’, Achaiah Kumar Rao who is working for promotion of AYUSH in Malaysia.

The list of Pravasi Bharatiya Winners is yet to be announced, but it is apprehended that many among the winners will include people involved with Modi’s events especially in the US. Dr Bharat Barai and Mahesh Mehta, two of the key organizer of Modi’s September 2014 Madison Square event, are believed to be on winners list. While Barai is a medical director at a cancer institute in Indiana, Mehta is associated with Vishva Hindu Parishad America. Ministry of External Affairs officials have said that winner list has been kept a secret. Winners will be announced on January 9, concluding day of the event.