The 24-year-old Varanasi native says the horrific incident has “hit the psyche” of students, affecting their daily lives and interrupting career plans. 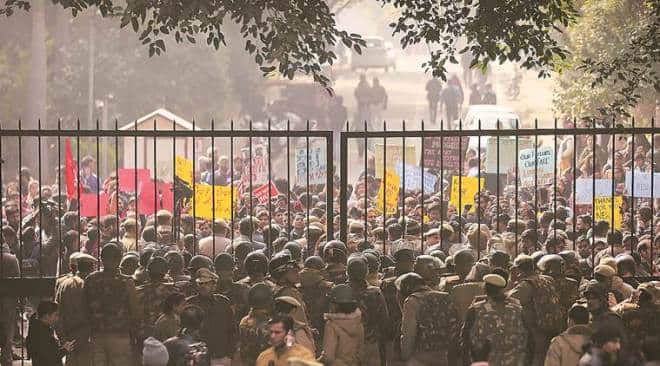 Many students attacked by the mob on that fateful evening have temporarily shifted to rooms of their friends, saying "the memories of the violence has left a deep scar on the psyche". (IE photo)

She considered JNU one of the safest campuses for women, but now Charukeshi Bhatt, pursuing her masters in Political Science from the university, feels insecure and disturbed in the wake of the violence unleased by a masked mob on the campus on Sunday.

The 24-year-old Varanasi native says the horrific incident has “hit the psyche” of students, affecting their daily lives and interrupting career plans. “I consider JNU as one of the best campuses in the country as far as the safety of women is concerned. Prior to the attack, I would feel free and safe to roam around here alone at any given time, day or night. But now, I generally ask a male friend to accompany me if I am stepping out at night in the campus,” she said.

“However liberal the women of JNU may be considered, who step out fearlessly otherwise, the trauma of the violence is taking a toll on our minds. We feel disturbed,” she said. The young student said she completed her Bachelor’s in Political Science from Delhi University’s Miranda House in 2018 before joining the Jawaharlal Nehru University and both the campuses have “taught me to live boldly and fearlessly”.

An uneasy lull prevailed on the campus on Friday as very few people were seen in the university streets and eating joints, otherwise brimming with students. The unease at the university’s Sabarmati Hostel, which bore a heavy brunt of the mob violence, was palpable as a few students were seen leaving the campus fearing for their safety on Thursday evening as well.

Shards of broken glass window panes lay swept on the main entrance of the residential facility, while inside the popular hostel’s mess, a stark silence welcomed visitors. No readers were seen at newspapers’ podiums and graffiti scrawled on walls and pillars described the incident as a “Black Sunday 2020”.

“Jan-5-2020 JNU will never forget” read another graffiti, screaming in bold red, as students passed by in silence. While the atmosphere inside the sprawling campus remained in the grip of uneasy calm, outside the main gate (the North Gate of the JNU) a posse of police personnel kept a tight vigil to prevent any untoward incident.

Many students attacked by the mob on that fateful evening have temporarily shifted to rooms of their friends, saying “the memories of the violence has left a deep scar on the psyche”. “Many of my friends who came running into my room on the first floor of the hostel that evening, while being chased by a feral mob, later jumped off the balcony to save their lives. I jumped into the balcony of a neighbour’s room and he sheltered me. The attackers banged the door but we had bolted it from inside,” recalled a male PhD student who did not wish to be identified.

His room still lay ransacked with shards of glass scattered on the ground as a gloomy air hung around it.
“I have shifted to a friend’s room in the campus. Memories of the attack send shiver down our spine,” he said.

Jyoti Kumari, another student who resides in the Sabarmati Hostel, recounted the “horrific evening” when she had seen “JNU girls in grip of abject fear”. “This was not to just commit violence, to damage and vandalise property, but to terrorise us into submission. I was there when the mob attacked our hostel, who were armed with shovels and other sharp objects. As I was shooting a video to capture their act, one of the attackers threw a stone at me, injuring my hand,” she told PTI. “But we will not relent and continue to fight against what is wrong and unjust,” she said.

On the Baba Gang Nath Marg, students had to face hardship in hiring cabs or auto-rickshaws as barricades put up on both ends of the road, a little ahead of the North Gate, forced people to walk on foot for long before taking any public transport.

Adding to their woes, several cab and auto-rickshaw drivers are not willing to take commuters to the JNU campus or pick them up from the varsity premises after the Incident took place. A woman student said the “atmosphere of fear” on the campus is “still palpable”. “The whole episode was done to further vitiate the atmosphere of JNU because we are a thinking campus and we raise voice against what is wrong and unjust. Many politicians mock us, saying ‘we should study and not agitate’.

My question is, have they left an environment that is conducive for education in any central university. We saw what happened in Jamia Islamia or AMU before that,” she said. Bhatt said the violence inflicted by the mob wanted to instil fear among the students and on Wednesday night the library was totally deserted, “something I have never seen in JNU”.

“One of my classmates who had an internship opportunity in France, declined to take it up, in solidarity with the fellow students. Imagine his mental condition,” she said. “Though the incident has disturbed us, they cannot break the spirit of JNU,” Bhatt added.