Menon is a professor at the School of International Studies at JNU and was invited by the JNVU’s English department to deliver a lecture on Thursday. 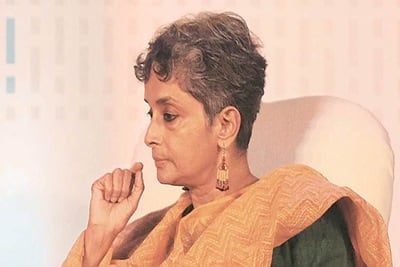 A police complaint has been filed against Jawaharlal Nehru University (JNU) professor Nivedita Menon by the registrar of the Jai Narain Vyas University in Jodhpur over her alleged remarks about Kashmir and the Indian Army during a speech on campus. Her speech in the campus has triggered protests by ABVP members which led to the shutdown of the university on Friday. Menon is a professor at the School of International Studies at JNU and was invited by the JNVU’s English department to deliver a lecture on Thursday on the topic, ‘History reinterpreted: nation, individual and culture.’

Vice-chancellor of JNU R P Singh confirmed her move and quoted Menon as saying that Kashmir was not an integral part of India and that soldiers worked for their livelihood and not the nation. He also said, “The university has lodged a complaint against Nivedita Menon and one of the organisers, Rajshree Ranavat, who also announced while introducing Menon that she is famous for her views on Kashmir. Today, some children from the ABVP and some faculty members shut down the university in protest. I have set up a three-member committee to look into the matter.” Singh also claimed that Memon said objectionable things and that Kashmir is not an integral part of India. He said, “She spoke about two-three objectionable things…that Kashmir is not an integral part of India and India should give up claims on Siachen…and that soldiers work for their livelihood and not for the nation, etc.”

Professor Menon denied all the charges and said that an “unnecessary controversy” had been created “based on rumours.” In an interview with the The Indian Express, Menon rejected the allegations and claimed that the “entire controversy has been kicked up based on the account of one former professor…who is an RSS supporter”. She said, “I never said anything about Kashmir being illegally occupied by India…the organiser introduced me as someone who had said so in an earlier speech from last year. Secondly, the point about showing India’s map upside down…that was a picture from the Himal magazine, which points out that the world is round and that nations are not natural objects but imagined constructs.” She also said, “Regarding the soldiers, I said that the Army is also a means of livelihood and that if we loved our soldiers why do we treat them badly. I did make a distinction between Hinduism and Hindutva, saying the latter is a political ideology that I am opposed to. What I basically said was not anti-national but anti-RSS and Hindutva and if that is a crime today then I don’t know what to say”

In an interview with the Indian Express, Jodhpur Police Commissioner Ashok Rathore said, “The university registrar filed a complaint, along with a report of what happened. We will be conducting an inquiry based on which we will decide whether to file an FIR or not.”