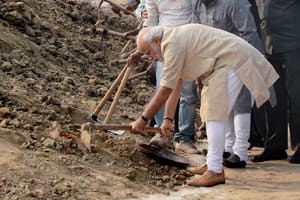 Modi arrived at the Assi Ghat where he climbed down three stairs and worked through an uneven muddy track to reach a makeshift stage where five priests were waiting for the Prime Minister to assist him in a special Ganga puja.

The Prime Minister spent close to 15 minutes offering prayers to the river, as hymns echoed through speakers installed at the venue.
After the prayers, Modi, who was accompanied by a few BJP leaders including party president Laxmikant Bajpai and city mayor Ram Gopal Mohale, picked up a spade and began vigorously digging the huge amount of silt that had deposited along the ghat after the rainy season.
Speaking to media persons assembled at the spot, he said that just like the launch of Swacch Bharat Campaign in Delhi on Gandhi Jayanti, he was nominating nine noted persons from UP to take the drive forward in the state.

From the Assi Ghat, the Prime Minister left for the ashram of Shri Anandamayi.

Modi is understood to have met inmates of the ashram and visited a charitable hospital inside the premises.