PM Narendra Modi travelling a lot as earlier he was not permitted: Sitaram Yechury

Taking a dig at Prime Minister Narendra Modi’s foreign tours, senior CPI(M) leader Sitaram Yechury on Friday said he might be making up for the last ten years… 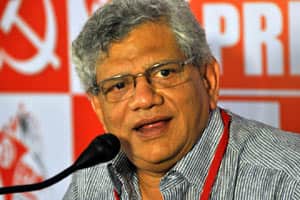 CPI(M) today attacked the NDA government over its relations with the US, saying the Narendra Modi-led dispensation has established India as a junior partner of America at the global level which will have serious implications on our relations with China and Pakistan. (PTI)

Taking a dig at Prime Minister Narendra Modi’s foreign tours, senior CPI(M) leader Sitaram Yechury on Friday said he might be making up for the last ten years as many of these countries did not allow him to visit in the past.

“May be he was not able to travel for the past ten years. I mean not being permitted to travel by these countries. He has got the chance now and he is going all over these countries. Let him. If he advances India with his dressing and all, it is good,” he said.

Yechury further said that Modi was creating more garbage than cleaning it, referring to the Prime Minister’s comments in Canada yesterday that his government was cleaning up the mess left behind by the previous governments.

“Back home what are you doing? The economic policies you are following are actually compounding people’s miseries …What he is doing is actually creating more garbage which is accumulating in our country. Therefore, I said it is a sustained political campaign,” he said.

Talking about the ongoing 21st national Congress of CPI(M) here, Yechury said general secretary Prakash Karat had introduced the draft political resolution for discussion, and 2,552 amendments and 248 suggestions were received while 71 amendments were accepted since it was released in January.

One of the objectives of congress was to produce an action plan for the growth of the party on its own, he said.