Prime Minister Narendra Modi unveiled the 112-foot tall statue dedicated to ‘Adiyogi’ (a form of Lord Shiva who according to the Hindu tradition is considered the first of yogis) in Coimbatore on the occasion of Maha Shivratri. 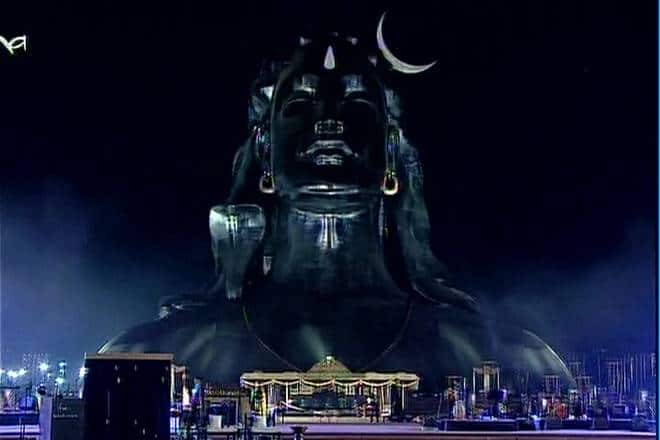 Guru Jaggi Vasudev said, the face of Lord Shiva is made of steel. The face is not just for aesthetics, it has geometric significance. (Pic: Twitter)

Prime Minister Narendra Modi unveiled the 112-foot tall statue dedicated to ‘Adiyogi’ (a form of Lord Shiva who according to the Hindu tradition is considered the first of yogis) today. The statue has been funded by Isha Foundation, founded by the popular yoga guru Jaggi Vasudev. The foundation has been mired in controversies since 2012. Tribal associations in the Coimbatore region allege that the statue lack approvals. However Isha Foundation in a statement on their website have said, “We have obtained the approval of the necessary authorities, including the District Collector, Coimbatore, the Forest Department and BSNL. A structural stability certificate from a government certified engineer has also been obtained for the 112-ft Adiyogi statue. A “No Objection Certificate” from the District Collector, Coimbatore for using wetlands for non-agricultural purposes has also been obtained. So the question of violation does not even arise.”

1. “‘Mahashivratri’ symbolises a union of divinity with a purpose of overcoming darkness and injustice.” – PM Modi

2. While talking about the importance of Yoga he said, “India has given the gift of Yoga to the world, by practising Yoga a spirit of oneness is created. The essence of yoga has not changed. Yoga is the catalytic agent for transformation.”

3. “The place we have gathered today is going to be a source of inspiration for all. Rejecting an idea just because its ancient, can be potentially harmful. It is essential to analyse and understand it and try to take it to the new generation in a manner in which they understand best.” – PM Modi

4. He continued to talk about Yoga and said, “Today whole world wants peace, not only from wars and conflicts but peace from stress, and for that we have Yoga. If the body is a temple of the mind, yoga creates a beautiful temple. That is why I call yoga a passport to health assurance.”

Here are five interesting facts about the statue that you would like to know:

1) The Face of Lord Shiva statue is made of steel: Guru Jaggi Vasudev said, the face of Lord Shiva is made of steel. The face is not just for aesthetics, it has geometric significance. A unique way of crafting a metal statue,” he said. “Essentially, we have taken small pieces of metal and put it together. This is a very hard way to do it, but it is the most inexpensive. This is unique – it hasn’t been used elsewhere,” he added.

Watch the unveiling of the statue here-

2) It took 8 months to build the statue: “We took about 2.5 years to design the face but our in-house team built it in eight months. It is an incredible feat of engineering and has been done in a very unique way,” Vasudev said.

3) It weighs 500 tonnes: “We have done it on a small budget, but in quite an ingenious manner. Also, we have made Adiyogi in such way that it needs least amount of maintenance, which is important long-term,” Vasudev said. According to an official, the whole structure is estimated to weigh around 500 tonnes!

4) The reason behind the statue being 112-foot tall: Queried about the significance of 112 feet, Vasudev said: “Symbolically, 112 is a significant number because Adiyogi opened up 112 possibilities for human beings to reach their ultimate potential. According to him, there is also a scientific significance — there are 112 chakras in the human system, with which you can work, to explore 112 dimensions of life. “In pursuit of the divine, you don’t have to look up because it not somewhere else. Each of the 112 possibilities is a method to experience the divine within you. You just have to pick one,” Vasudev added.

5) The face of Adiyogi will be the largest face of its kind on the planet: “This face is not a deity or temple, this is an iconic inspiration. The idea is not to build one more monument but to use it as a galvanizing force towards self-transformation,” Vasudev said. According to him, in the yogic culture, Shiva is not known as God, but as Adiyogi or the first yogi – the originator of yoga. “He was the one who first put this seed into the human mind that one can evolve if one is willing to strive. Yoga went everywhere not as a religion, belief system or philosophy but as methods,” he elaborated.

On Mahashivratri, will be in Coimbatore to join the programme organised by @ishafoundation at the Isha Yoga Center. @SadhguruJV #Adiyogi pic.twitter.com/SZnaHbrlij

The Isha Foundation plans to have 112-foot tall faces of Hindu God Shiva or `Adiyogi’ in the other three regions of the country – east, north and west. “We want to place these tall faces of Adiyogi in four corners of the country. The first one is in the south, at the Isha Yoga Centre, Coimbatore. The eastern one will most likely be in Varanasi. For the north, it will be somewhere north of Delhi and the western one will be in Mumbai,” Vasudev said.

(With inputs from IANS)