BJP leader and Union Minister Suresh Prabhu today said PM Modi is championing the cause of India worldwide and is accepted as a leader in both the East as well as West. 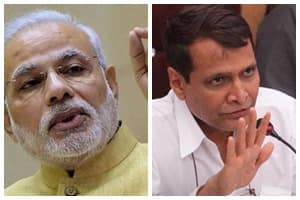 Indian Railways Minister Prabhu said, PM Modi is respected as a leader both in the developed world as well as in the developing world (PTI)

Reacting to ally Shiv Sena’s jibe asking Prime Minister Narendra Modi to refrain from “maligning” the country from foreign soil, BJP leader and Union Minister Suresh Prabhu today said Modi is championing the cause of India worldwide and is accepted as a leader in both the East as well as West.

“That is their (Shiv Sena) opinion, the opinion of millions of people in India are different. Mr Modi has been been championing the cause of India globally,” Prabhu said at a press conference here.

“Mr Modi has been given the rare honour of addressing the joint sitting of US Congress,” he said.

He said Modi is regarded highly among African nations, the Pacific Islands as also in Latin American countries.
Stressing on Modi’s importance in the global scenario, Prabhu said US President Barack Obama had called the Indian Prime Minister over phone to seek his views on climate change issues.

Shiv Sena had yesterday said Prime Minister Narendra Modi’s remarks in Doha about India being plagued by corruption “maligned the nation’s image”, and questioned if scams in BJP ruled Maharashtra, Madhya Pradesh and Gujarat can be attributed to the Gandhi family.

Since Modi is the face of the nation, other countries may believe what he says about India which in turn might affect the financial condition of the country, an editorial in Sena’s mouthpiece ‘Saamna’ said.

Vowing to root out corruption in India, the Prime Minister had on June 12 said in Doha on the second leg of his five-nation visit that he “faced problems” by depriving many people of their “sweets” and saved over Rs 36,000 crore annually by stopping leakage and theft in government schemes.