Plea in Supreme Court over alleged misuse of sedition law

A plea was filed in the Supreme Court today over alleged misuse of penal law on sedition by the Centre and various states, claiming that students, scribes and intellectuals involved in social activities were being prosecuted on a “routine” basis. 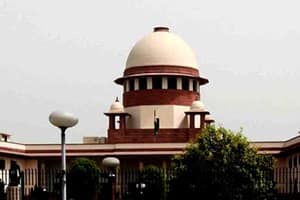 "Where a decision is taken that is manifestly in consonance with the language of the tender document or subserves the purpose for which the tender is floated, the court should follow the principle of restraint. (PTI)

A plea was filed in the Supreme Court today over alleged misuse of penal law on sedition by the Centre and various states, claiming that students, scribes and intellectuals involved in social activities were being prosecuted on a “routine” basis.

The petition, which is likely to come up for hearing next week, sought the apex court’s intervention to address the “misuse” of section 124 A (sedition) of the IPC contending that such a charge was being framed with a view to “instill fear and scuttle dissent”.

“There has been an increase in the number of cases of sedition against intellectuals, activists, students, with the latest being the sedition charge on Amnesty India for organising a debate on Kashmir,” the plea, filed by NGO Common Cause, said.

“In this regard, a petition has been filed to address the misuse and misapplication of Section 124A (sedition law) by the Centre and various State Governments leading to routine persecution of students, journalists and intellectuals engaged in social activism. It is submitted that these charges are framed with a view to instill fear and to scuttle dissent,” the plea, filed through advocate Prashant Bhushan, said.

Acting on a complaint by the ABVP on Saturday, Bengaluru police had slapped sedition charges against Amnesty International India after an event it had organised on allegations of human rights violations and denial of justice in Jammu and Kashmir.

Referring to the report of National Crime Records Bureau, the plea said that 47 cases of sedition were filed in 2014 alone and 58 persons arrested in connection with these cases, but the government has managed only one conviction.

It cited a series of recent examples of activists being slapped with sedition charges, including Arundhati Roy in 2010 for alleged anti-India remarks at an event in Kashmir, cartoonist Aseem Trivedi in 2012 for allegedly insulting the country through his cartoons, doctor and human rights activist Binayak Sen, JNUSU President Kanhaiya Kumar and DU professor S A R Geelani.

The plea sought a direction that either Director General of Police or Commissioner of Police be asked to give a report before registration of an FIR for the offence of sedition that the act has led to violence or there was an intent on the part of the accused to create public disorder.

It also sought a direction that the investigations and prosecutions be dropped in cases where such a reasoned order is not provided and the act in question involved peaceful expression or assembly.