Piyush Goyal assures electricity for all by May 2017

India would have 100 per cent electrification for all by May 1, 2017, Union Power Minister Piyush Goyal said on Saturday. 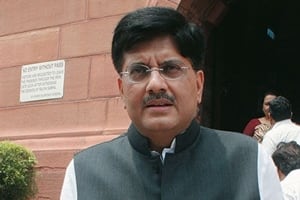 Goyal said that the people of the country brought the BJP-led NDA to power in 2014 after imposing their trust on Narendra Modi. (PTI)

India would have 100 per cent electrification for all by May 1, 2017, Union Power Minister Piyush Goyal said on Saturday.

“I am confident that 100 per cent electrification in rural, Left-Wing Extremism (LWE) districts and dense forests would be achieved by May 1, 2017, a year ahead of the schedule Prime Minister Narendra Modi had set,” Goyal told reporters on the margins of a two-day conference of power ministers here.

The state-run Rural Electrification Corporation (REC) is also formulating a scheme to extend soft loans to the states at a flat rate on long-term to achieve 100 per cent household electrification across the country.

Power ministers and officials from 20 states and two Union Territories participated in the conference along with heads of state-run energy firms.

Goyal also said he was sure all states will join the Ujawal Discom Assurance Yojana (Uday) by November so that they can sign the agreements by December and issue bonds by March 2017. The central government-sponsored Uday scheme is meant for financial turnaround and revival package for electricity distribution companies (discoms), with a view to finding a permanent solution to their present financial mess.

The scheme aims to improve operational efficiency of all discoms, reduce cost of power, lower interest rates and enforce financial discipline, by allowing state governments to take over 75 per cent of their debt and pay back lenders by selling bonds.

“As all states are on the Urja app, consumers will receive real-time information through SMS about power outages in their area, planned or non-planned. About 2,600 census towns, which were not covered under the IPDS (Integrated Power Distribution Scheme) have also been brought under the app,” he said.

Goyal also said that a new committee has been formed to revive the 22 stalled large hydro power projects with fresh investments to make them viable.

He asked the REC and Power Finance Corporation to assist stressed and stalled small hydro power projects across the country to make them viable and get them restarted at the earliest.

“The government will also aid the setting up of small solar units by farmers to power agricultural pump sets,” he added.