Piketty & more: Thomas Piketty’s landmark work is dissected and debated in a series of essays

Thomas Piketty kicked up a storm a couple of years back with his book, Capital in the Twenty-First Century. 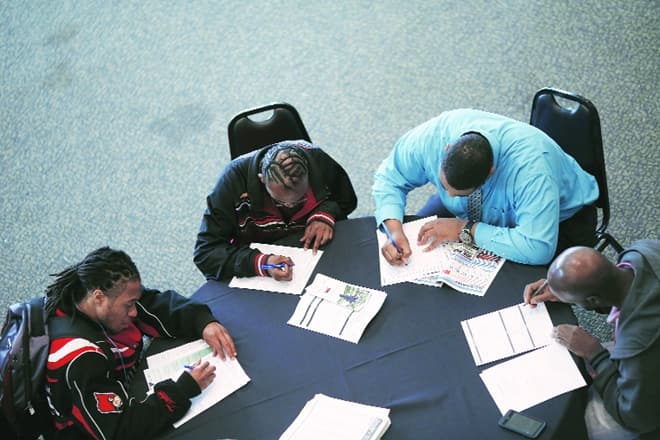 Applicants at a job fair in Kentucky, USA. The book says inequality has increased in the USA over the years, with contributory factors being erosion of minimum wage, decay of unions, competition from low-wage workers, etc. (Bloomberg)

Thomas Piketty kicked up a storm a couple of years back with his book, Capital in the Twenty-First Century. He did point to the perils of capitalism, which fostered the creation of greater inequality to the extent that capitalists got to control policymaking. This, in turn, only exacerbated inequality. He had spoken of inequality from both income and wealth, but his worry was about the latter. A simple thumb rule was that we can see a problem brewing in case the return on capital is higher than the growth in income. His solution was having a progressive tax structure. The basic arguments are simple and proved with data and, hence, the 700-page treatise should have found a silent place on the library shelf. But this must probably be the most debated and contested book in recent times, with several critiques revolving around the methodology, as well as solutions.

It is against this background that After Piketty: The Agenda for Economics and Inequality has been put together with a set of 22 essays under four headings: Reception, Conception of Capital, Dimensions of Inequality and Political Economy of Capital and Capitalism. In the end, there is a response from Piketty as well. It is as voluminous as the book it seeks inspiration from, with the reader having the option to skip the chapters that get too theoretical or mathematical. They are well summarised, as well as introduced, which makes it easier for the reader to navigate this tome.

The first section, Reception, is as the word suggests, an introduction to the subject, which starts from the success of Capital in the Twenty-First Century and is followed up with commentaries from probably two of the world’s greatest economists: Robert Solow and Paul Krugman. It is argued that inequality has increased in the USA, with some of the contributory factors being erosion of minimum wage, decay of unions, globalisation, competition from low-wage workers in poor countries, technology, etc. Therefore, there are stark differences between the top 1% and the rest, with several numbers thrown in to show the widening of the gap.

Krugman points out that both politicians and economists are responsible for not bringing up this issue for active discussion. The disturbing fact is that we are now in a situation, where we are back on a path of patrimonial capitalism, where the commanding heights are controlled by dynastic families. While inequity exists in Europe and the USA, there is more redistribution by the government in Europe, which makes conditions more bearable. In the section on capital, there is an interesting essay on slave capital, which contributed historically to inequality. This piece by Diana Berry blames the government directly for bringing this inequality, as the slaves were never paid their due wages.

Eric Nielsen emphasises the concept of human capital and mobility of labour. This was not captured by Piketty and the author puts it on a par with physical capital. Another angle brought in by Laura Tyson and Michael Spence is the effect of technology and globalisation, which replace lower levels of skills quite swiftly from routine tasks. Technology makes obsolete certain tasks like the bank teller’s. Globalisation brings in outsourcing through cheap labour, which makes, say, labour in the USA worse off, thus extending inequality.

Technology, hence, will be an important aspect that explains inequality, as people adjust differently to such wide-sweeping changes. Also, education becomes important for bringing about less inequality, but access to quality education matters. In this context, there is also some discussion on the ‘fissured workspace’, where jobs keep getting outsourced by function and, hence, those originally working in specific lines are pushed out and have to compete for limited space at the same lower level, as several non-core activities are being outsourced by organisations to others.

The next section is on the various dimensions of inequality. A contrarian view is expressed by Christoph Lanier, where he shows that in the 2000s, inequality has actually come down in countries. There was a slowdown in growth in inequality for the average developing nation and, hence, there is convergence across countries, as per this study, which makes interesting reading.

There is also an essay that looks closely at Piketty’s utopian solution of creating a global database of capital and a progressive tax on wealth. Here, it is argued that these are at best ex-post solutions and carrying such a database is going to be thwarted by inertia. Another essay on the macro models of wealth inequality argues that wealth is concentrated, but there is significant mobility within its distribution, especially during one’s lifetime.

Heather Boushey has a feminist interpretation of patrimony-based capitalism, where she argues that women get discriminated all the time. Such inequality, it is argued, will lead to macroeconomic instability. It also makes financial systems less stable (we can see it in India, too, where loan waivers are necessary when we want to correct inequality). Further, the wealthy, who spend the most, get affected when the asset market becomes volatile and affects their incomes. Such concentration also leads to economic slowdowns when spending slows down.

The last section is on the political economy of capital and capitalism. One of Piketty’s arguments was that mass enfranchisement was inadequate to bring about equality and what worked was a war, where capital was destroyed and the ensuing war-induced taxation corrected these fundamental flaws. Marshall Steinbaum supports this view and also says that, historically, it has been observed that wars and depressions discredit the policies and power of political establishments. There is another view that, historically, wealth inequality is driven by extractive and inclusive institutions. Institutions underlying wealth accumulation may be ‘inclusive’ for citizens granted such rights, but will be ‘extractive of others’, which are also the marginalised groups.

One can always argue if Piketty was right or wrong, but what is important is that he has got everyone thinking, and inequality is definitely being spoken of seriously everywhere now. Nowhere does one accept plain vanilla economic growth as being ‘the be all and end all’ objective to be fulfilled if not accompanied by equality. If economic growth has to take place, we need to have more inclusion for growth to be sustained. The view that wealth-founded inequality is stark can’t be denied and is more serious, as it also has links with politics and policymaking. You only have to look around to see how far this is true.