Parties putting out all efforts ahead of Rajya Sabha polls 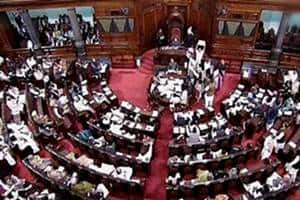 Congress's Pradeep Tamta and BJP backed Independent Anil Goel are taking on each other to grab the seat which falls vacant with BJP member Tarun Vijay's tenure getting over next month. (PTI)

To secure a seat in Rajya Sabha, a candidate requires 34 first preference votes.

Congress has 29 MLAs and is short of five votes, which can be managed by the 8-member RLD, which has shot into sudden prominence amid high probability of cross-voting.

Samajwadi Party has fielded seven candidates in the polls for the Upper House of Parliament but the seventh candidate is short of nine first-preference votes for victory.

If the three remaining votes of RLD go to the seventh candidate of Samajwadi Party (SP), still the ruling party
nominee will be six short of the requisite number of votes.

SP Legislature Party met here this evening to finalise its strategy followed by a dinner.

At the CLP meeting, it was decided that a whip will be issued to its members to vote for the party candidate, Mathur
said.

With polling for Rajya Sabha slated for June 11, lobbying is likely to intensify with Union Home Minister Rajnath Singh reaching here tomorrow for a two-day visit.

Next Story
Narendra Modi’s speech to US Congress: Highlights of PM’s address – from combating terrorism to building stronger India