The Citizenship Amendment Bill got 125 votes in support, while members 105 voted against it in the Upper House. Shiv Sena didn't participate in voting.

The Rajya Sabha on Wednesday passed the contentious Citizenship (Amendment) Bill 2019 following an over 8-hour-long fiery debate in the House. The legislation got 125 votes in support, while 105 members voted against it in the Upper House. Shiv Sena decided against voting over the Bill. Responding to the debate over the controversial Citizenship (Amendment) Bill 2019 in Rajya Sabha, Union Home Minister Amit Shah said that the legislation should have been brought 50 years ago. “If this bill was brought 50 years ago, then the situation had not been so severe today,” he said, adding that the Congress party’s definition of secularism was limited to Muslims. Speaking in the Upper House earlier, BJP’s Subramanian Swamy  said that the Congress and the Opposition are confusing the Citizenship Amendment Bill with NRC. Accusing the Bharatiya Janata Party of pushing its Hindutva agenda through the Citizenship Amendment Bill, Congress leader P Chidambaram said that the legislation will be struck down by the Supreme Court. “Parliamentarians are abdicating their duties. This is a slap in the face of Parliament. Parliament has been asked to do an unconstitutional thing. It will not stop here. It will go to the judges,” Chidambaram said.   The AIADMK and Janata Dal (United) voted in favour of the Bill.

The Citizenship (Amendment) has passed the crucial test in Rajya Sabha. The legislation got 125 votes in support, while 105 members voted against it in the Upper House. Shiv Sena decided against voting over the Bill.

Shiv Sena's Rajya Sabha MP Sanjay Raut has confirmed that his party decided not to participate in the voting over the Citizenship Amendment Bill 2019 in the Upper House.

Amendment to send Citizenship Amendment Bill 2019 to Select Committee of Parliament has been defeated.  124 members voted against  the amendment, while 99 in favour of it being sent to the Select Committee.

Rajya Sabha votes for CAB to be sent to Select Committee

Home Minister Amit Shah slams Congress, says statements of party leaders were the same as that of Pakistan PM Imran Khan over the Citizenship Bill.

HM Amit Shah: On #CitizenshipAmmendmentBill2019, Pak PM's comment and Congress's comment- both are alike. Why are you (Congress) rattled?.... I want to ask why did Congress oppose the Enemy Property Bill. pic.twitter.com/ettfToJcJX

During the debate, Kapil Sibal ji asked how will we determine whether minorities have been persecuted or not. The bill is about granting citizenship, it is not about snatching rights from anyone. We were born here and will die here. Don't teach me the idea of India, says Amit Shah

Shiv Sena supported the Bill yesterday. They should tell the people of Maharashtra as to what happened within the span of a night that they changed their stand today, Amit Shah says.

Citizenship Bill is not to snatch anyone's Indian citizenship. Muslims need not fear or worry about anything, says Amit Shah defending the legislation in Rajya Sabha.

The Congress party's definition of secularism was limited to Muslims, Union Home Minister Amit Shah said in Rajya Sabha while responding to debate over the Citizenship Amendment Bill 2019.

CAB should have come 50 years ago: Amit Shah in Rajya Sabha

If this Bill was brought 50 years ago, then the situation had not been so severe today, says Union Home Minister Amit Shah replying on the debate over the Citizenship Amendment Bill.

All bills of our government are brought in the House only after they are vetted by the Law and Legislative Department. This law is valid and in larger interest of the nation, says Union Law Minister Ravi Shankar Prasad.

The Congress is confused between the NRC and Citizenship Amendment Bill.  Article 14 does not bar this Bill. Congress has made similar demand for relaxations for religious minorities in Bangladesh and Pakistan for getting Indian citizenship,  says BJP MP Subramanian Swamy in Rajya Sabha

The Janata Dal Secular has demanded the Citizenship Amendment Bill to be sent to Parliament's Select Committee for scrutiny.  "This Bill will be a dilution of our secularism policy in this country. I strongly oppose this Bill. I recommend that the Bill be sent to a select committee of Parliament for scrutiny," D Kupendra Reddy said.

I support this Bill. People in north-east have no religious bias and aren't communal. It's not about religion, minority or majority communities. It's about illegal migrants who've come into our region and threatening to run over our population, says NPF leader KG Kenye

This Bill is against the basic structure of BR Ambedkar's Constitution. This is an attempt to break the nation and spread hatred, says Sanjay Singh, Aam Aadmi Party, Delhi

This Bill should be thrown in Bay of Bengal, says MDMK leader Vaiko

If this obnoxious, abominable, undemocratic, unreasonable, unpardonable, unjustifiable, unconstitutional Bill is passed today in this Council of State, it will become a black chapter in the annals of this Upper House. This Bill should be thrown in Bay of Bengal, said MDMK leader Vaiko

Kapil Sibal, Congress on HM Shah's statement "CAB wouldn't have been needed if Congress hadn't allowed partition on basis of religion": I don't understand which history books the Home Minister has read. Two-nation theory is not our theory. It was perpetrated by Savarkar. pic.twitter.com/I2ayqUOVWB

Speaking in Rajya Sabha during debate over the  Citizenship Amendment Bill 2019, PDP leader Mir M Fayaz accuses the BJP government of targeting the Muslims. "I stand to oppose this Bill. Since this govt has come to power, the way it has brought bills like Triple Talaq & Art 370-Muslims have been targeted,"Fayaz said.

Our party is opposing the Citizenship Amendment Bill. Why are you violating Article 14 by excluding Muslims? Muslims being excluded is the sole problem of this entire Act, says Satish Chandra Misra, BSP, Uttar Pradesh.

Don't need certificate of patriotism from anyone: Sanjay Raut

Shiv Sena MP Sanjay Raut: I am seeing in many parts of our country protest is happening against the Citizenship Amendment Bill. They are our Indian citizens too, so we don't need a certificate of patriotism from anyone. This bill is not religious so this bill should be discussed on the basis of humanity. Will you give voting rights to the refugees coming from Afghanistan, Pakistan and Bangladesh.

Rajasthan Deputy CM Sachin Pilot on Citizenship Amendment Bill 2019: 'For the first time in independent India, issue of deciding citizenship on basis of religion has come up. I don't think the bill will pass the judicial scrutiny. This is majority versus morality.' 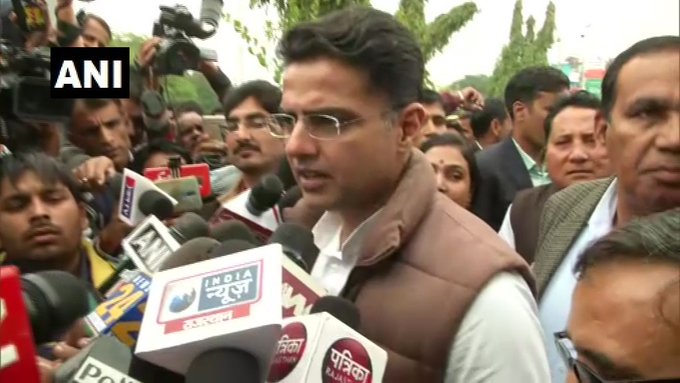 Citizenship Bill: This is a sad day, says P Chidambaram in Rajya Sabha

Former Finance Minister P Chidambaram says that this (BJP-led NDA) government is ramming through Citizenship Bill to advance its Hindutva agenda. 'This is a sad day. I am absolutely clear that this law will be struck off,' he adds. 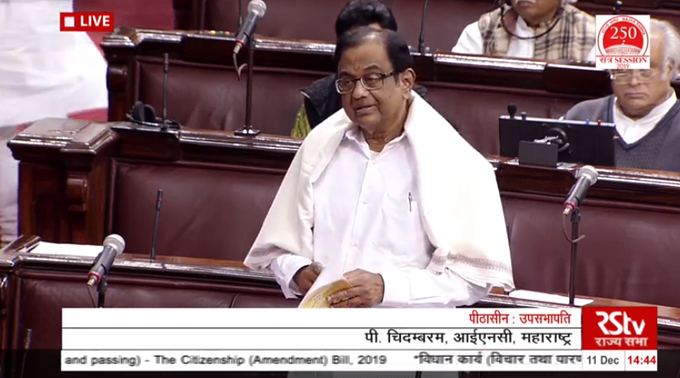 Citizenship Bill is slap in the face of Parliament, will be struck down in SC: P Chidambaram

P Chidambaram on Citizenship Amendment Bill 2019: "Parliamentarians are abdicating their duties. This is a slap in the face of Parliament. Parliament has been asked to do an unconstitutional thing. It will not stop here. It will go to the judges. Unelected judges and lawyers will then decide whether it is constitutional or not. Why only religious persecution - why not political persecution? why not linguistic persecution? I dare the government to lay the opinion of the law department in the House. This will be struck down in the Supreme Court. "

Citizenship Bill will be a blow to our secularism: DMK MP T Siva

DMK MP T Siva says that if the Citizenship Amendment Bill this Bill is passed, it will be a blow to India's secularism. 'You (BJP) have a mandate to justify all citizens of the country and not segregate one section and make them feel victimised,' he adds in Rajya Sabha.

CPI(M) TK Rangarajan on Citizenship Amendment Bill 2019 in Rajya Sabha: Suppose you make the law, who will be responsible for any repercussion on minorities? That is why my party oppose this. Don't spoil the country, don't spoil the constitution, that is my request.

Telangana Rashtra Samithi MP Keshava Rao termed the Citizenship (Amendment) Bill as anti-Muslim. He accused the BJP of dividing the nation and declared that the party MPs will oppose the bill in the House. The TRS has six MPs. "We agree in principle to aiding the persecuted, but there should be no discrimination on basis of religion," he said.

The Janata Dal (United) of Nitish Kumar is supporting the Citizenship (Amendment) Bill in the Rajya Sabha. Speaking on the floor of House, JD(U) MP Ram Chandra Prasad Singh said that the bill is not against the minorities of the country.

Samajwadi Party MP Javed Ali Khan speaks against the Citizenship (Amendment Bill). He said, "We understand that minorities will not be treated fairly in a theocratic state." "Why a deadline of Dec 13, 2014 being drawn? Have persecution of minorities stopped after that in neighbouring countries?" he asked.

Derek O'Brien in Rajya Sabha urged the BJD and Janata Dal (United) to oppose the bill. "Today is a test for parties like JD(U) and BJD," he said. Both the JD(U) and BJP are supporting the bill and voted in its favour in the Lok Sabha on Monday.

AIADMK Rajya Sabha MP SR Balasubramanian said that his party is supporting the Citizenship (Amendment) Bill. The AIADMK has 11 MPs in the Upper House.

No lunch break in Rajya Sabha

There will be no lunch break today in Rajya Sabha, as debate on Citizenship Amendment Bill is underway.

We are moving from a democracy to dictatorship: TMC MP Derek O'Brien in Rajya Sabha

Trinamool Congress MP Derek O'Brien speaks against the bill in the Rajya Sabha. He said, "We are moving from a democracy to dictatorship." He added that of the bill is passed there will be a people's movement against CAB.

JP Nadda speaks in favour of CAB in Rajya Sabha

Minorities protected after partition in India, but not in Pakistan: JP Nadda

BJP leader JP Nadda is now speaking in the Rajya Sabha in favour of the Citizenship (Amendment) Bill. He said minorities in India were protected after partition, but the same did not happen in Pakistan.

Congress' MP Anand Sharma said that the BJP promised to bring the bill in its manifesto. "But constitution of no party can be above or in contradiction to the Constitution of India," he said. Sharma added that "in our religion, we believe in rebirth, and that we meet our elders. So if Sardar Patel meets Modi ji, he will be very angry with him, Gandhi ji will ofcourse be sad, but Patel will be indeed very angry."

Anand Sharma said that India has never before considered religion as a factor to grant citizenship to refugees. He also referred to the famous September 11, 1893 speech of Swami Vivekananda wherein he had spoke about India's tolerance towards all religions at World Parliament of Religions.

LOAD MORE
According to the Citizenship (Amendment) Bill, members of Hindu, Sikh, Buddhist, Jain, Parsi and Christian communities, who have come from Pakistan, Bangladesh and Afghanistan, till December 31, 2014 facing religious persecution there, will not be treated as illegal immigrants but given Indian citizenship. The bill amends the Citizenship Act, 1955.