The Upper House had witnessed ugly scenes when the opposition members were protesting against the three farm bills during the Monsoon session. 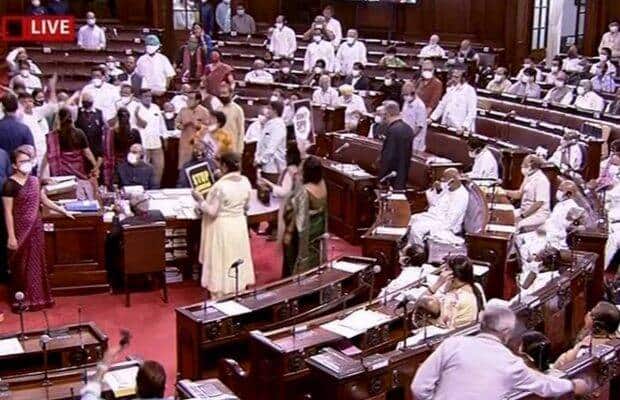 Twelve Rajya Sabha MPs, including six from the Congress, were suspended on Monday for the remaining part of the Winter Session of the Parliament over their misconduct and unruly behaviour during last session. Rajya Sabha Deputy Chairman Harivansh Narayan Singh announced the suspension of the members and adjourned the House till Tuesday.

The 12 MPs include six from the Congress, namely Phulo Devi Netam, Chhaya Verma, Ripun Bora, Rajamani Patel, Syed Hussain and Akhilesh Singh. Priyanka Chaturvedi and Anil Desai of Shiv Sena, Dola Sen and Shanta Chhetri of Trinamool Congress, Elamaram Kareem from CPM and Binoy Viswam from CPI are the others suspended for indiscipline in the last session of the House.

A note read that they willingly obstructed the business of the house through “unprecedented acts of misconduct, contemptuous, violent and unruly behaviour and intentional attacks on the security personnel” on the last day of the Monsoon session.

Calling the suspension an “unparliamentary behaviour”, Shiv Sena MP Priyanka Chaturvedi said: “From Dist Court to Supreme Court, an accused is heard even there, lawyers are provided for them too, sometimes Govt officials are sent to take their version. Here our version wasn’t taken.”

“If you see the CCTV footage it has been recorded how male marshals were jostling female MPs. All of this on one side & your decision on the other? What kind of unparliamentary behaviour is this?” she added.

The Upper House had witnessed ugly scenes when the opposition members were protesting against the three farm bills during the Monsoon session. On August 11, several Opposition MPs climbed on the officials’ table, waved black cloth and threw files when the House began a discussion on farmers’ protest against new reform laws.

The Monsoon Session was scheduled to end on August 13, but both the Houses had to be adjourned sine die two days early due to constant disruptions and protests over the Pegasus snooping row and the three farm laws.

Union Minister Piyush Goyal had urged Rajya Saba Chairman Venkaiah Naidu in August to form a special committee that would investigate the House proceedings in detail and take strict action against such MPs.