Can India trust US in isolating Pakistan or are ‘stern warnings’ mere lip service?

Is US finally waking up to the reality that Pakistan will never come around and eliminate terrorists? 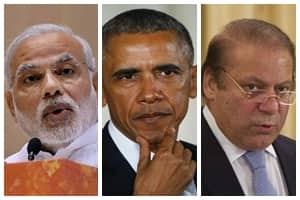 Is US tactically withdrawing support from Pakistan? Can India trust US to oppose Pakistan openly?

In a strong statement, the US has warned Pakistan to shut terror shops and go after the perpetrators of the 26/11 Mumbai terror attack. America has also slammed Pakistan for linking peace in Kabul to that in Kashmir. Earlier this year, US dropped the idea of selling F-16 fighter jets to Pakistan at subsidised rates. It has also verbally lashed out at the country for its inability to check terrorist groups from using its soil as a safe haven. The statements coming out from US are increasingly harsh, especially in wake of the Uri terror attack which killed 19 Indian soldiers. And, while calling for de-escalation of tensions between India and Pakistan, US did not say that India was wrong in carrying out surgical strikes across the LoC. Is US finally waking up to the reality that Pakistan will never come around and eliminate terrorists? Is US tactically withdrawing support from Pakistan? Can India trust US to oppose Pakistan openly?

Sreeram Chaulia, the Dean of Jindal School of International Affairs and a renowned Strategic Affairs expert is of the view that US is becoming ‘less dependent’ on Pakistan. He even feels that Pakistan’s status as a major non-NATO ally of US is also questionable now. “US strategy towards Pakistan has seen a shift in the last few years. In fact since the 1999 Kargil war you can say that US has been criticising Pakistan. The rhetoric has increased of late, not only because Prime Minister Narendra Modi has deepened defence ties, but more importantly because US is vexed with Pakistan on the issue of Afghanistan,” Chaulia tells FE Online.

Elaborating on the reasons for America’s growing irritation with Pakistan, he says, “With regards to the Haqqani network, and the way Pakistan has been behaving, US knows that Pakistan will not really help it in checking terrorism in Afghanistan. Additionally, US itself is cutting its losses in Afghanistan, understanding that it can have some hold only on the urban areas. To that extent its dependence on Pakistan is decreasing and it has little reason to support the country.” “US is not even giving peanuts to Pakistan when it comes to aid. The F-16 deal is also on hold because US has refused to subsidise the planes for Pakistan. For US, Pakistan is its major non-NATO ally, but with the latter’s fading importance for America, that status is also under question and doubt,” he substantiates.

Also Read
Opposition by ‘pseudo-environmentalists’ to Metro car shed in Aarey could be ‘sponsored’: Devendra Fadnavis
Singaporean minister to deliver first Arun Jaitley memorial lecture
By not welcoming PM Modi, KCR has insulted not individual but institution: BJP
Revenge served cold: How a two-year-old speech by Devendra Fadnavis has come back to haunt Uddhav Thackeray

Agrees Colonel (retd) K V Kuber, an Independent Consultant on Defence and Aerospace. KV Kuber adds that Pakistan’s isolation is a reality. “US is being less kind to Pakistan than it was in the past and is making vociferous and focused comments. It is losing its patience with Pakistan and I think it is tactically withdrawing support,” Kuber tells FE Online. “There is a definite shift in its strategy towards Pakistan. The point is that for US, it is important to eliminate terrorism from its grass roots and to that extent it will not support Pakistan for too long. Stopping the F-16 fighter jet deal with Pakistan was a very strong statement to make. As far as Pakistan goes, it may pretend that it is not bothered by the change in US attitude, but the fact is that there are very few countries who aid and support Pakistan,” he adds.

However, some defence experts feel that it’s easy to get carried away by the ‘stern’ warnings that US seems to be giving to Pakistan. One would be tempted to believe that amidst deepening Indo-US ties, America would abandon Pakistan, and declare it a ‘terrorist state’, but all this may be lip service, they caution.

Professor Phunchok Stobdan, Senior Fellow at Institute for Defence Studies and Analyses doesn’t see any reason to take US statements seriously. Talking to FE Online, Stobdan said, “Pakistan is more important to them (US) than India. We are important from the economic point of view and to an extent in Asia Pacific region as a whole, but Pakistan is crucial for America’s strategic interests. The military ties and understanding between US and Pakistan militaries runs very deep, one should not underestimate it.” “And as long as the Afghanistan and Iran issues are outstanding for the US, it will not do much with regards to Pakistan. Also, one should not read too much into US statements right now, since the country is set to see a leadership change,” he concludes.

Rajeswari Pillai Rajagopalan, Senior Fellow and Head, Nuclear & Space Policy Initiative at ORF does not want to underestimate the change in US strategy, but at the same time believes that America’s options are limited. “US is being more vocal about its stand against terrorism and has been condemning Pakistan. Importantly, after India’s surgical strikes across the LoC, US did not stand by Pakistan on the issue. It has time and again asked Pakistan to act against terrorist groups on its soil, so that is not something new. But, yes it is being more vocal about condemning Pakistan. Additionally, Pakistan’s attempt to link peace in Kabul with that in Kashmir found no takers in US,” she notes. “But, at the end of the day US needs Pakistan for its interests in Afghanistan. So to that extent, I don’t see it openly declaring Pakistan as a terrorist state,” she opines.

There is little doubt that US is uncomfortable about the terror networks that are being allowed to flourish in Pakistan and its recent admonitions are proof of its annoyance. As far as America’s options go, there is little it can and will do in terms of military intervention. And as experts point, despite its reducing importance, Afghanistan is one area that US would not want to strategically let go of. Pakistan has managed to isolate itself in a big way, but whether US comes out in opposition of India’s neighbouring country is something that only time will tell. Whatever US does, one thing is for sure, it will only watch its own interests!