Pakistan kills and mutilates Indian soldier along LoC; what action from India will force it to stop?

Pakistan’s continuing barbarism along the LoC has led to three Indian soldiers being martyred today, one of whose body has been mutilated. 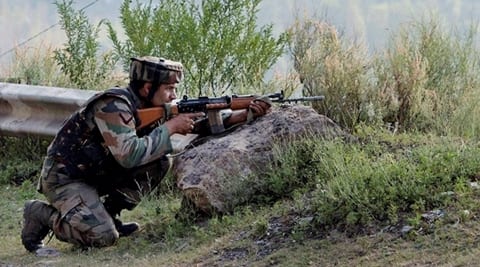 India has been inflicting heavy casualties on the Pakistani side, but it seems that India's neighbouring country refuses to learn a lesson. (File PTI Photo)

Pakistan’s continuing barbarism along the LoC has led to three Indian soldiers being martyred today, one of whose body has been mutilated. The gruesome act is the second by Pakistan in a span of less than one month. Pakistan’s cowardly attacks along the LoC continue despite Indian Army’s repeated befitting replies – be it in the form of the much talked about surgical strikes across LoC or fire assaults. India has been inflicting heavy casualties on the Pakistani side, but it seems that India’s neighbouring country refuses to learn a lesson. What is the way forward for India? What can India do to put an end to Pakistan’s mindless attacks? Will there ever be an end to this ongoing aggression and proxy war by Pakistan?

Colonel (retd) K V Kuber, an Independent Consultant on Defence and Aerospace believes that any military solution will be temporary in nature. “We are no longer living in times, where one can with military might capture an area geographically, and claim it as our own. Even if we put our entire military might, we are unlikely to get a geographical advantage in terms of taking Pakistan,” he tells FE Online. Kuber slams Pakistan for “living in a fool’s paradise”. “Kashmir will never belong to Pakistan,” he says. According to Kuber, Pakistan started a proxy war in the late 80s after it realised that it cannot win a full-fledged war against India. “They (Pakistan) are fighting the cheapest war possible. They are actually running a militancy industry, cultivating people to commit such heinous acts. I don’t see an end to this, while China is openly supporting Pakistan. US is providing lip sympathy to India, as of now,” he opines.

Brigadier Gurmeet Kanwal (Retd), Distinguished Fellow, Institute for Defence Studies and Analyses (IDSA) is of the view that stepping up retaliation to Pakistan is the only way forward. “Last time when a soldier was mutilated, the Indian Army retaliated with aggressive fire assaults. That is the only language that Pakistan seems to understand. They are a rogue army. The only solution with Pakistan is to keep raising the threshold of our strikes against them,” he tells FE Online. Kanwal feels that it is “extremely necessary” to hurt them at the LoC. “ISI and Pakistan Army are the perpetrators of violence and proxy war, and they operate at LoC. So, we need to raise the threshold of the punishment that we inflict on them,” he says that all this has to be substantiated with economic, diplomatic and covert measures. “You have to strike them hard, so that the action is prohibitive enough,” he says.

So, by when will Pakistan call it quits, if ever? Kanwal predicts that India should be successful in checking the Pakistan Army in 2 summers. “Winters don’t matter that much because the level of infiltration is down. But in two summers, Pakistan Army would be asking for peace. During the Kargil war, 25,000 rounds of fire were used in a span of 50 days. If we fire even half that number one summer, and another half in the next summer, it should be enough to shut Pakistan up. We have preponderance of firepower, that Pakistan doesn’t. We should try to limit our collateral damage,” he substantiates.