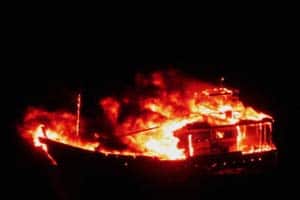 Explosives-laden Pakistani boat burnt and sank after the explosion off Gujarat coast. (PTI)

Indian Coast Guard (ICG) today said suspicions were raised about the identity of crew of the explosives-laden Pakistan boat intercepted by them, as they did not resemble fishermen from their dressing style and carried no nets.

ICG said they followed the standard operating procedure (SOP) while intercepting the hostile boat, which as intelligence input suggested, had set sail from the port city of Karachi from Pakistan for some “illicit transaction”.

The maritime law enforcement agency reiterated that the vessel was set on fire by its crew members, causing it to explode and later sink. The incident took place about 365 km off the coast of Porbander in the Arabian Sea on the intervening night of December 31 and January 1 after a hot pursuit by Coast Guard.

“We saw four men on the boat, they were nowhere looking like fishermen, they were wearing t-shirts and half pants, and this raised suspicion on our side,” Coast Guard Commander (North-West Region) Kuldip Singh Sheoran told reporters here.

A search operation is on for the bodies of the crew members and wreckage of the vessel, he said.

Asked if the boat occupants were terrorists, Sheoran said, “Multiple Indian intelligence agencies are jointly investigating the incident and they will go to the bottom to it.”

“We received intelligence input at around 8.30 in the morning (of Dec 31) about the suspicious boat. We dispatched our Dornier aircraft and ship in that direction and by 1 in the afternoon we had positively identified the ship,” he said.

“At around midnight our vessel ‘Rajratan’ reached near the boat and tried to stop it by following standard operation procedure. But instead of surrendering, the boat started moving in a zig-zag way and switched off lights. We chased it for about one-and-a-half-hours.

“After the hot pursuit, we fired warning shots, but the boat did not stop. We fired more warning shots. After some time, the crew of the boat set it on fire and later it sank with them (occupants),” ICG officer said.

Regarding reports that there were two other suspicious boats in the high seas, Sheoran said they had no such information.

The ICG Commander said they have increased vigilance along the Gujarat coast after the boat incident and also in view of the two upcoming high-profile events here – Pravasi Bharatiya Divas and Vibrant Gujarat Summit.

“We are alert round-the-clock, but due to these events we are on extra alert. Our ships and aircraft are doing their job of patrolling the sea,” he added.