Kokilaben Dhirubhai Ambani, the widow of late industrialist and founder of the Reliance empire, on Monday thanked the government and President Pranab Mukherjee… 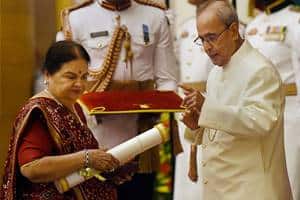 Kokilaben Dhirubhai Ambani, the widow of late industrialist and founder of the Reliance empire, on Monday thanked the government and President Pranab Mukherjee for conferring on him the Padma Vibhushan, the country’s second-highest civilian award.

“Dhirubhai lived a life of simplicity and humility, creating world class assets for the nation, and great wealth for the country and his fellow countrymen, on a scale never witnessed before,” Kokilaben, who received the award on behalf of her late husband, said in a statement.

“In his own words, I take this occasion to pray that thousands more Dhirubhai Ambanis are born to our great country, to accelerate our social and economic development for the lasting benefit of our over 1.3 billion fellow Indians,” she added.

Dhirubhai Ambani was conferred the award posthumously for his contributions to trade and industry — the only person chosen for the Padma Vibhushan this year under this category.

“The Padma Vibhushan awarded to Shri Dhirubhai Ambani is an honour to the indomitable spirit of Indian entrepreneurship, innovation and ambition to always do better than the best in the world,” the elder son Mukesh Ambani, chairman of Reliance Industries, said earlier.

The younger son, Anil Ambani, who oversees the Reliance Group, said the honour was a recognition of Indian entrepreneurship.

“I personally, and the entire Reliance family, are truly overwhelmed and deeply humbled at the award of this great national honour, the Padma Vibhushan, for the greatest entrepreneur and wealth creator in the history of India, my beloved father, Shri Dhirubhai Ambani.”