According to a notification issued by Congress, the process for filing nominations for the election was from September 24 to 30. 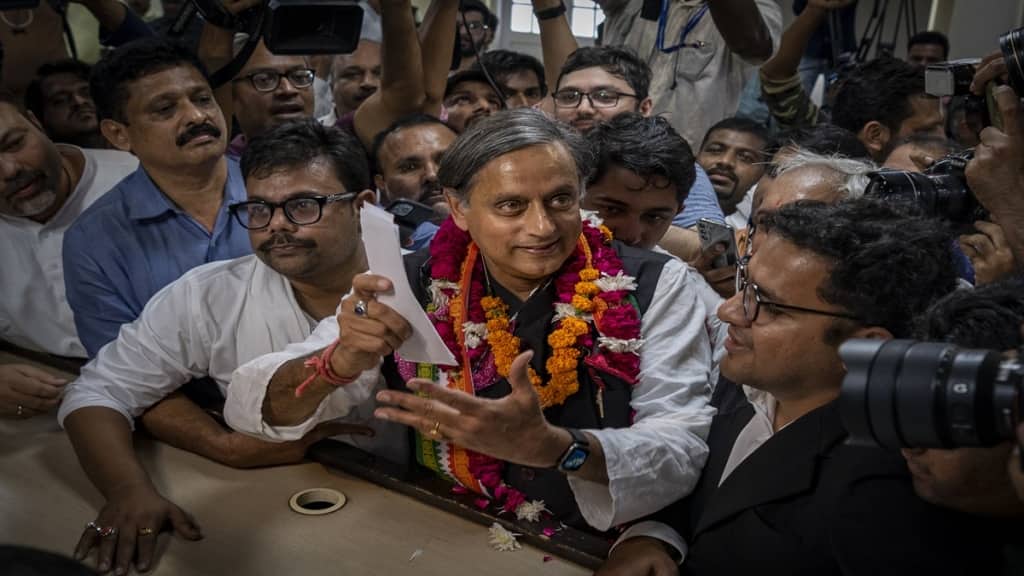 He said the answer to the Congress' current challenges lies in a combination of effective leadership and organisational reforms.

Set for an electoral face-off with Congress veteran Mallikarjun Kharge for the party president’s post, Lok Sabha MP Shashi Tharoor on Sunday said he would be open to the idea of a public debate between the candidates as it would evoke people’s interest in the party similar to the recent British Conservative Party leadership race.

Asked about Tharoor’s remarks on holding a debate, Kharge, however, did not appear inclined towards having such an engagement, saying, “I don’t want to get into that, I only know how to work, give me an opportunity to do that.” In an interview with PTI, Tharoor also said the Nehru-Gandhi family has held and will always hold a special place in the hearts of Congress party members.

He said the answer to the Congress’ current challenges lies in a combination of effective leadership and organisational reforms.

Kharge and Tharoor were left in the fray in the Congress presidential poll after former Jharkhand minister K N Tripathi’s nomination was rejected on Saturday.

Talking about what he brings to the table, Tharoor has he has a “proven and credible track record in leading at the highest levels of organisations, whether it has been at the UN” or more recently for the Congress party as founder-chairman of the All-India Professionals’ Congress.

At the UN, Tharoor said, “as the under-secretary-general in-charge of the body’s public information department, I managed the communications of the UN’s largest department comprising of over 800 staff in 77 offices worldwide, rationalised its structure, trimmed its budget and sharpened its efforts – all of which prompted many to urge me to contest to lead the UN Organisation itself”.

Referring to the All-India Professionals’ Congress, he said, “I had to create from scratch and which in just five years since 2017 has over 10, 000 fellows from across 20 states in the country.” In terms of organisational reforms, the former Union minister said, he has outlined a set of priorities that he believes can help strengthen the Congress and take on the machinery of the BJP.

“Since our current situation is widely deplored, it may be an advantage not to be burdened by the baggage of having spent too much time in the present party organisation and be able to approach it from a fresh perspective,” the 66-year-old leader said.

Asked if he would want a public debate between the party’s presidential candidates as is seen in many western democracies and if such an exercise would help delegates make up their minds, Tharoor said, “I would be open to the idea.” Tharoor insisted that “there are no ideological differences among us; rather, it is a question of how we propose to go about achieving the objectives we already agree upon.” Batting for a public debate, he said between the last date for submission of nominations and the date for polls, there are roughly about two-and-a-half weeks and it would be practically and logistically difficult to reach out to all the 9,000-odd delegates who are eligible to vote in these elections, he argued.

“In that sense, a platform where candidates can exchange their ideas and vision for the party in a constructive manner would potentially facilitate the transmission of these perspectives to more of the delegates than we can reach,” the Thiruvanthapuram MP said.

At the same time, such an exchange of ideas would certainly garner much interest from non-voting sections as well, be it other Congress workers, the media and even the general Indian public, he said.

“As I have often pointed out, an exchange of ideas among candidates could have beneficial effects for the party — for instance, we have seen the global interest in the British Conservative Party during their recent leadership race, a phenomenon we already witnessed in 2019, when a dozen candidates contested to replace Theresa May and Boris Johnson emerged on top,” Tharoor said.

Replicating a similar scenario will similarly increase the national interest in the Congress party and galvanise more voters towards the party once again, he added.

Asked about it at a press conference here, Kharge said, “I don’t want to go into this. Whatever I have to say, I will say it clearly.

“There are many people who are intellectual, learned, they may want a debate, I don’t want to get into that, I only know how to work, give me an opportunity to do that.” Salman Soz, who was a proposer for Tharoor, in a tweet said the Lok Sabha MP is open to a public debate with Kharge ji, should both sides agree.

“A public debate would attract a lot of attention for Congress and would help Congress delegates and the public get a sense of the vision & plans of these leaders,” he said Asked if a non-Gandhi president was on the cards for the Congress and whether the Gandhi family would continue to occupy a place of pre-eminence, Tharoor said, “Obviously, the Nehru-Gandhi family has held and will always hold a special place in the hearts of Congress party members – and with good reason too.” Aside from the great legacy they have inherited from their illustrious forebears, they have consistently brought together the various groups, ideologies, geographies and communities that collectively make up the fabric of the Congress party, he asserted.

“They also have a great record of success and experience in leading the party, both when in government and during tough times in the wilderness, when they have still managed to rally the men and women of the Congress together,” he said.

“Let us not forget the magnitude of what they have achieved for the party — or the ultimate sacrifice paid by two former presidents from the family,” he added.

Tharoor further said, “This is why many of us had expressed both publicly and in private our hope that Rahul Gandhi would resume his leadership, an outcome that would undoubtedly be the most popular among the rank and file of the party.” He said now that it appears unlikely to happen, he hopes that the family will recognise that they are and remain the foundational pillar of the Congress, moral conscience and ultimate guiding spirit.

They cannot and must not withdraw from that role, whatever the formal designations they choose to retain, he said.

Tharoor had said on Friday that he is aware of his underdog tag and talk of an ‘official candidate’ in some quarters but he has been assured by the Gandhi family – Sonia Gandhi, Rahul Gandhi and Priyanka Gandhi Vadra – repeatedly that they are “neither directly nor indirectly” backing anyone.

According to a notification issued by Congress, the process for filing nominations for the election was from September 24 to 30.

The date for scrutiny of the nomination papers was on October 1, while the last date for withdrawal of nominations is October 8.

The final list of candidates will be published at 5 pm on October 8. The polling, if needed, will be held on October 17. The counting of votes will be taken up on October 19 and the results will be declared the same day.

More than 9,000 Pradesh Congress Committee (PCC) delegates will vote in the poll.