Not a battle between rivals but a friendly contest among colleagues, tweets Tharoor posing with Digvijaya

Singh on Thursday collected nomination papers for the party president election at the AICC headquarters in Delhi and said he is likely to file his nomination on Friday. 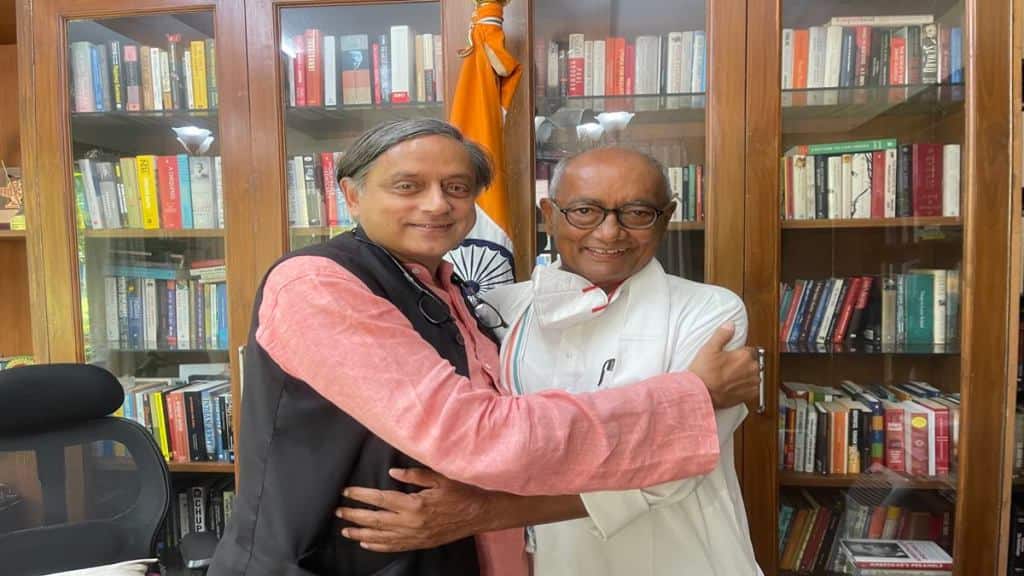 Senior Congress leader Digvijaya Singh, who is all set to run for the post of the party president, called on his co-contestant Kerala MP Shashi Tharoor on Thursday. The two leaders can be seen beaming while posing for a photograph that Tharoor posted on Twitter.

Sharing the picture of the meeting between the two leaders, Tharoor wrote in a tweet, “Received a visit from Digvijaya Singh this afternoon. I welcome his candidacy for the Presidency of our Party. We both agreed that ours is not a battle between rivals but a friendly contest among colleagues. All we both want is that whoever prevails, Congress will win.”

Quote-tweeting the tweet by Tharoor, the Congress loyalist Singh said that both the Congress leaders believe in the “Gandhian Nehruvian Ideology and shall fight them relentlessly come what may”.

Singh on Thursday collected nomination papers for the party president election at the AICC headquarters in Delhi and said he is likely to file his nomination on Friday.

When asked by reporters if he was merely posturing, the Congress leader said, “Why don’t you take me seriously?” On Friday, the former Madhya Pradesh CM had said that he had opted out of the race for Congress chief.

Meanwhile, Tharoor is all set to submit his nomination papers for the upcoming presidential elections of the AICC on Saturday, the last date for nomination.

Referring to the Rajasthan political crisis, where 90 Congress MLAs had rebelled in view of speculations about elevation of Gehlot’s arch-rival Sachin Pilot as the CM, Gehlot said that “with that incident, I have decided not to contest the elections”.

“I won’t contest these elections in this atmosphere, with moral responsibility,” said Gehlot.

With Congress leader Rahul Gandhi maintaining ‘one man, one post’ norm in the party, had Gehlot been elected as the Congress president, he would have to quit as the CM.

The rebel MLAs in Rajasthan had demanded that someone from the Gehlot supporters be made the CM, and not Pilot.

Gehlot further said that he apologised to the interim president Sonia Gandhi for the ruckus in Rajasthan triggered by his loyalists over a possible change of guard in the state. When asked if he would remain as the CM, Gehlot said, “I won’t decide that, Congress chief Sonia Gandhi will decide.”