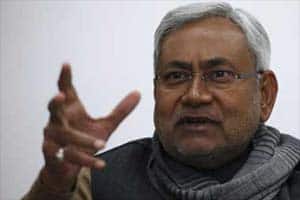 Senior JD(U) leader Nitish Kumar today “blamed” BJP for stalemate in Parliament and suggested Prime Minister Narendra Modi that his words on controversial issues threatening secular fabric of the country would rather enhance his stature.

“Agar do shabd bolenge to apki garima badhegi hi (if you speak two words it would rather enhance your stature),” Kumar said in his piece of advise to the PM.

He urged the PM not to make it a “prestige issue” and his disapproval of several “irresponsible and poisonous” utterances by partymen on religious conversion and praising Nathuram Godse, would help clear the air.

On Rajya Sabha failing to discharge function for the fifth consecutive day today, Kumar justified opposition conduct and criticised the treasury benches for not taking initiative to end the stalemate.

“Opposition is justified in exercising its right in demanding statement from PM on issue to keep secularism protected in the country,” Kumar, whose party JD(U) is part of opposition unity on the matter in the Rajya Sabha, told reporters emerging from Legislative Council.

“The onus is on the ruling party to ensure Parliament functions smoothly. They need to take initiative for this which is lacking in present case,” Kumar said.

Launching a scathing attack at BJP, Kumar said raising of issues of religious conversion was part of their “well thought strategy” to divert peoples attention from “failure” to deliver on promises made on the issue of black money, enhanced bonus to farmers and creating jobs for youths.

“Seven months have passed of this government coming into power and it has nothing to show as achievements on promises it had made during poll to the people…logo ka moh bhang ho raha hai (people are getting disillusioned),” he said adding controversial issues of religious conversion and eulogising Nathuram Godse are parts of “diversionary strategy”.

Kumar said to highlight government’s “failure” on black money, bonus for farmers, special status to Bihar and creating jobs for youths among others, six parties of erstwhile Janata Parivar would hold a “mahadharna” at Delhi on December 22.

On efforts at merger of Janata Parivar, Kumar, who is an important leader behind the process, said talks were going on.

“Two meetings of leaders have taken place on merger issue. In the last luncheon meeting it was decided to authorise Samajwadi Party President Mulayam Singh Yadav to look for modalities of merger.

“While the efforts of merger are on we have decided to organise joint programmes on different issues and December 22 mahadharna is part of this,” he said.