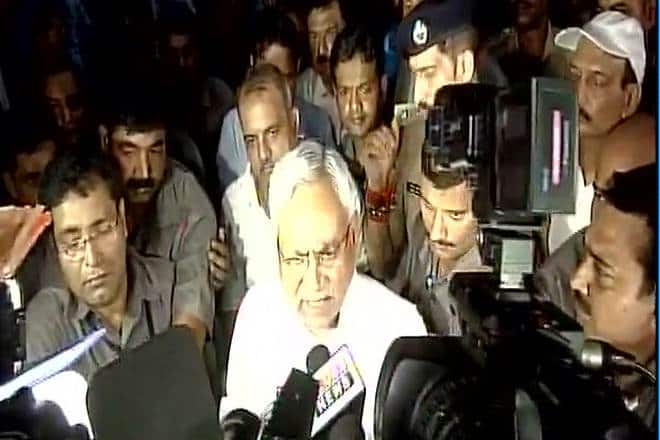 Nitish Kumar said that he was stepping down as he wasn't able to function in the way in which he wants to. (Source: ANI)

Nitish Kumar has resigned after submitting his resignation to the Bihar Governor. Addressed the media thereafter, Nitish said that he was stepping down as he was not able to function in the way in which he wants to. Nitish said, ”I tried to work as much for the people of Bihar, but under the current circumstances I am unable to discharge my duties as the CM effectively”. Kumar who is known as a clean leader told the media that he won’t compromise on corruption and said he had no option but to step down. Nitish said, ”I had no option but to quit as Chief Minister and I have never asked for resignation of anyone”.

Nitish Kumar also told the media that he has quit keeping the interest of the state in mind. Kumar said, ”Did not have an option apart from quitting, I am committed to the the people of the state”. He further added, ”I asked both Lalu Prasad and Tejashwi Yadav to tell me about the allegations faced by them. Tried to stay in the alliance for as long as possible”. He further added ”I did not ask Tejashwi to submit his resignation over the allegations, I only asked him to explain the charges to me. The gravity of the charges warranted an explanation, I kept waiting but did not get any response”.

Prime Minister Narendra Modi through a tweet congratulated Nitish Kumar for taking a step against corruption. The Prime Minister in his tweet also said that the 1.25 billion citizens of the country have welcomed the step taken by Nitish Kumar.

BJP’s Bihar President Sushil Modi has welcomed the resignation and said ”We are happy that Nitish has not compromised. He stepped down for a good cause”. The BJP state president has also said that the BJP is not in favour of  a mid-term election.